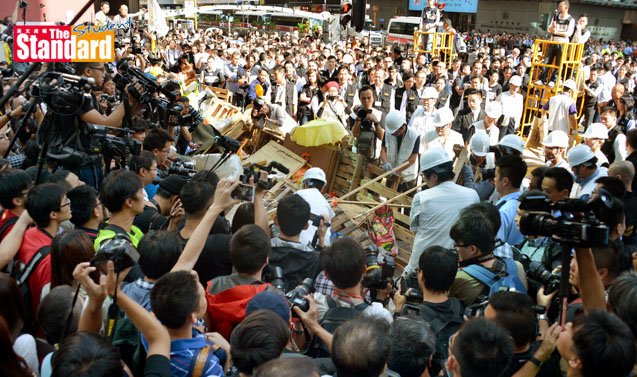 BAILIFFS, assisted by more than 3,000 police officers, were poised to clear barricades in the Nathan Road section of the Mong Kok (旺角) protest zone yesterday, the scene of a series of violent clashes between Occupy Central (佔領中環) supporters and opponents.

Barricades in sections of Argyle Street (亞皆老街) and Dundas Street (登打士街) which had been occupied for 60 days were cleared on Tuesday, in accordance with an injunction applied for by the Chiu Luen Public Light Bus Company (潮聯公共小型巴士有限公司).

More than 3,000 officers, including members of the Police Tactical Unit (警察機動部隊) and Emergency Unit (衝鋒隊), were on standby to deter troublemakers and support the bailiffs. Protesters said they had taken all their personal belongings from tents ahead of the action.

But they vowed to stand their ground and not retreat. One said, “The injunction is talking about removing the obstacles, not people. I don’t think they will disperse people.” Another said, “Even if I die, I am not going to retreat.”

Police said prior to the clearance that they had noticed that “some people at the illegally occupied areas have prepared supplies to provoke others to put up resistance”. They added, “There are also some people on the internet, claiming they will re-occupy the cleared areas or other sections of roads after the bailiffs have completed the removal actions in order to continue with the illegal occupation.”

Police reiterated they are “duty bound to take resolute actions to preserve public order and safeguard public safety if anyone occupies new sections of roads or those that have been cleared”.

Bailiffs were ready to clear the barricades on Nathan Road (彌敦道) close to Argyle Street yesterday.

On Monday afternoon a team of bailiffs and representatives of taxi groups went to the area to post 22 court notices.

The first notice was posted at the junction between Nathan Road and Argyle Street at about 2pm.