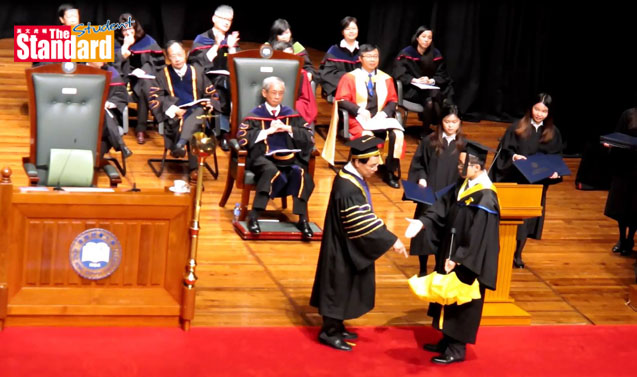 SEVERAL Baptist University (浸會大學) graduates continued to snub its president Albert Chan Sun-chi (陳新滋), who last Saturday refused to present a student with his certificate after he opened a yellow umbrella on stage.

Chan took the umbrella but did not present the student with the certificate nor did he shake hands.

Another graduate held an open umbrella onstage and pointedly refused to accept his certificate from Chan.

During the ceremony, Chan quoted a poem by famous politician Liang Qichao (梁啟超): “When we fight for justice, we should not be afraid of the attacks. I am prepared to be struck by tens of thousands of arrows. Even if tens of millions of arrows were fired at me, I will defend the attacks.”

Later, he said, “Our students have great aspirations and I appreciate that, but this is a solemn ceremony. I accept students wearing yellow ribbons but holding umbrellas and walking on [stage is] disrespectful.

“Today [they] hold up umbrellas, tomorrow they can hold up flags, if there were Eight Banners (八旗子弟) [representing the eight administrative divisions in the Qing Dynasty (清朝 )], what could we do if they held up eight flags?” Chan asked.

Mio Chan Tin-chun (陳天俊), president of the students’ union, told The Standard (英文虎報) that Albert Chan had only himself to blame.

He said the graduation ceremony was intended for students to showcase what they have learned over the past three years.

What students have learned is “an outcome from Liberal Studies courses at the university, and he refuses to admit the fact”, adding that Albert Chan did not know what was meant by the university’s stated mission of educating the whole person.