Hong Kong yearns for the yen 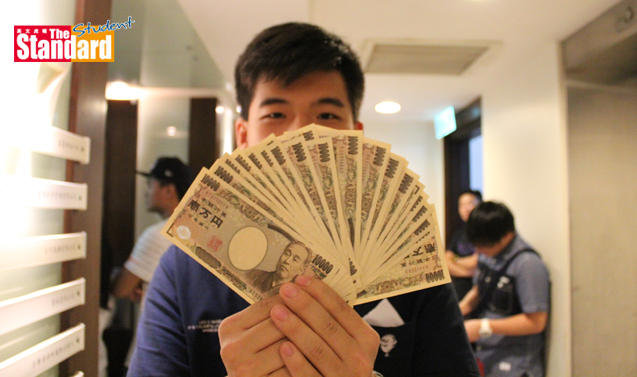 A YEARNING for the Japanese currency reached fever pitch last week when it fell to a seven-year low against the US dollar.

The chairman of electronics components maker CEC International (CEC國際) Lam Wai-chun (林偉駿) said the drop in the yen’s value will drag down purchasing costs for the company in the short run, which means it will offer discounts in the coming weeks.

But Lam said supply may not be sufficient as Japan will control output in the current environment and competitors will also stock goods.

He warned that Japan will raise its product prices due to pressure from higher costs for raw material imports.

Rebecca Tse So-han (謝素嫻 ), general manager of marketing at Yata Department Store (一田百貨), said the purchasing pressure has been easing with the weakening of the yen since the start of the year.

But the cheaper yen is only one of the many factors that influence product prices, as rent and salary costs also play an important role.

Tse said the latest drop in the yen’s value will be reflected in Yata’s January prices. The exceptions will be some fresh fruits, discounts for which may be reflected quickly.

The Hong Kong Automobile Association (香港汽車會) general committee member James Kong Yat-hung (江日雄) said that although he could not see any significant falls in the price of new Japanese cars, dealers could be forced to act if there should be a fall in demand.

“Yes, if the yen continues to weaken, then I believe the dealers will do something,” he said. It depends more on market demand than on the cheaper currency.

On Friday, the Bank of Japan raised its annual monetary base target to 80 trillion yen (HK$5.45 trillion) – up from 70 trillion yen – in an attempt to stimulate spending.

The move surprised global markets and sparked a huge sell-off by investors.

Analysts predict the yen will slide even further due to more speculative selling.