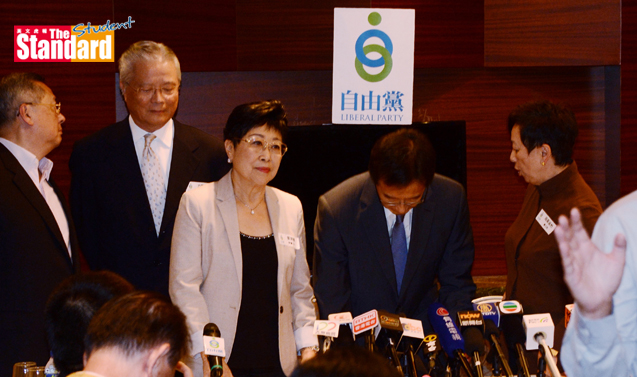 But Tien remained defiant and said he would not retract his words urging Leung to think about quitting.

Earlier that day in Beijing, 267 members of the Chinese People’s Political Consultative Conference Standing Committee (CPPCCSC, 全國政協常委會) voted to strip Tien of his membership on the CPPCC National Committee, with only two against and three abstaining.

CPPCC chairman Yu Zhengsheng (俞正聲) told the meeting that it was the first time someone had lost his membership based on Article 29 of its charter, which stipulates that members can be expelled if their acts are in violation of a conference resolution.

In March this year, the CPPCC passed a resolution in support of the Hong Kong government and Leung to govern Hong Kong based on the rule of law.

Tien said, “The fact that I urged Chief Executive CY to resign because Hong Kong is getting ungovernable is certainly, according to Article 29 [of the CPPCC charter], incorrect. I accept their decision.”

The 67-year-old, who has been on the CPPCC for 17 years, admitted that he made the remarks “maybe because I have been in Hong Kong for many years. I am only aware that I am a lawmaker and Liberal Party leader. I have neglected the title of CPCCC member. This is my fault.”

But Tien said he would not retract his remarks on Leung stepping down.

“There are still many people in Admiralty. I think [when I made the comment] at that time I had sufficient evidence. The situation has not changed, certainly. I will not take my words back.”

But he said he was surprised by Beijing’s swift reaction to his remarks.