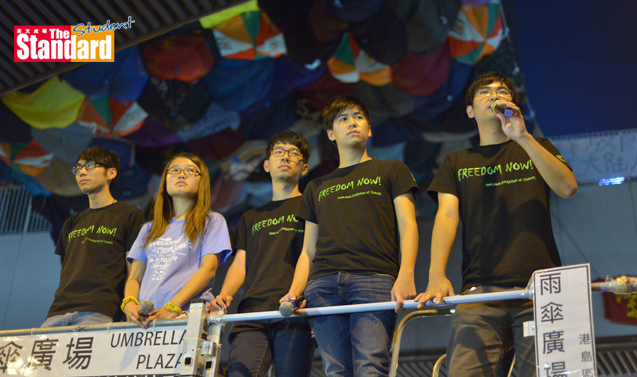 THE two-hour meeting on Tuesday between student protesters and the government was a good start but did not yield any concrete results.

For the next 90 minutes, each side alternately had three to five minutes to expound on their views and ask questions. The media was not allowed to raise questions during the talks, which were aired live.

Lam said she hoped the talks would be the first of several. But she conceded, “As far as their position is concerned, I’m afraid we can only agree to disagree.” The students’ response could be seen during the talks when frustration began to mount and an hour and 45 minutes later. They said young people had made enough concessions in their efforts for “equal and basic political rights”.

Cheng said he believed both sides sincerely wanted to talk.

Chow said on Monday night at the Harcourt Road (夏.道) protest zone that they would not give up their principles on political reform.

Occupy Central (佔領中環) co-organiser Chan Kin-man (陳健民) said demonstrators may leave the protest zones if the results of the talks are satisfactory.