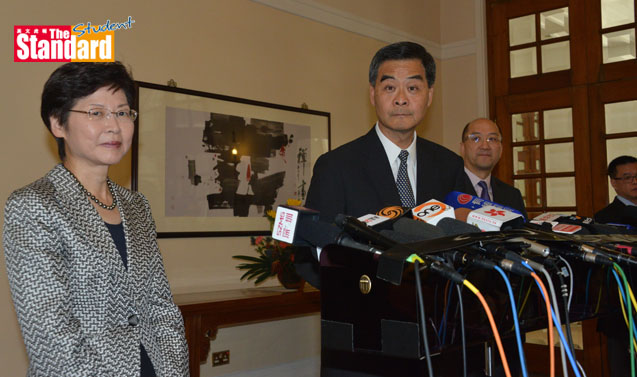 THE government will restart talks with the Hong Kong Federation of Students (HKFS,香港專上學生聯會) as early as this week, Leung Chun-ying (梁振英) said last Thursday.

The dramatic turn came a week after the government abruptly pulled out of discussions aimed at ending mass democracy rallies.

Federation general secretary Alex Chow Yong-kang (周永康) said the group is willing to talk, but asked why it cannot have a stance on political reform when the government has its own.

“Why are you calling on us to have a dialogue when you are not going to stop clearance of the protest sites?” he asked.

Speaking at Government House (禮賓府), Leung said, “We are ready, we are prepared to start and maintain that dialogue.

“This is why over the past few days, including this morning through third parties, we expressed the wish to the students we would now start the dialogue to discuss universal suffrage as soon as we can and hopefully within the following week.”

He said the government will also focus on restoring order in Hong Kong as quickly as possible, including normalising traffic.

But question marks remain over whether fresh talks can make any headway in the stalemate between the government and protesters.

Chow said if and when the Federation holds talks, it will raise all the political reforms sought by Hong Kong people, including civil nomination, abolition of Legislative Council (立法會 ) functional constituencies and amendment of the Basic Law (基本法).

Occupy Central with Love and Peace said in a statement, “We urge every occupier not to forget our original intention .. that is, to fight for a democratic political system with love and peace.”

Meanwhile, Civic Party lawmaker Ronny Tong Ka-wah (湯家驊) said he does not expect much to come out of the talks but hopes they might calm things down.