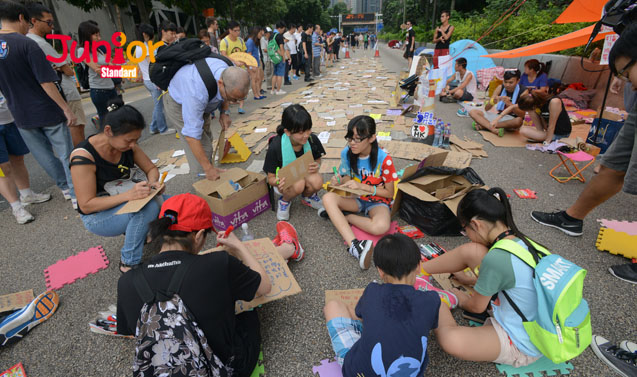 IT is back to school for 30,000 secondary students in Wan Chai (灣仔), and Central (中環) and Western (西環) districts after an unscheduled week-long holiday prolonged by Occupy Central (佔領中環) and related road blocks.

Monday was the first normal working day after the National Day (國慶) break. That, coupled with the closure of several major thoroughfares such as Queensway (金鐘) and Harcourt (夏.), Gloucester (告士打) and Nathan (彌敦) Roads and the saturation of alternative routes such as Leighton (禮頓), inner Gloucester and Kennedy (堅尼地) Roads, caused serious traffic congestion.

The Education Bureau (教育局) said 32 secondary schools will reopen initially followed by the reopening of kindergartens, primary and special schools the next day.

Schools in these districts were suspended for four days and are now preparing to resume classes, said Principal Assistant Secretary for Education Sophia Wong Suk-wah (黃淑華).

Wong advised parents that, with the transport system still unstable, they should plan for their children to leave home for school earlier than usual, adding that special buses will be arranged to help students get to class on time.

“Schools should be flexible if teachers or students are late,” Wong said, adding that student safety is the top priority.