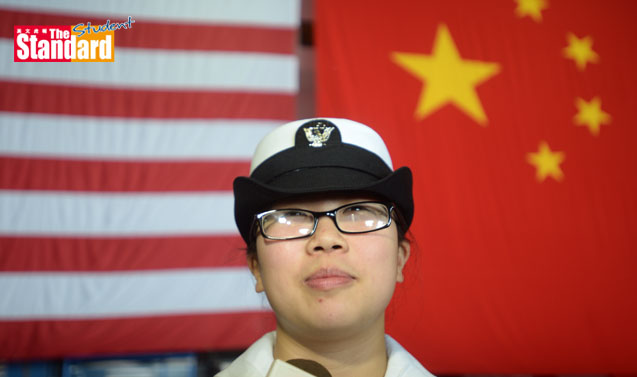 THE US State Department announced it would allow sales, on a case-by-case basis, of lethal equipment to help the maritime security of Vietnam (越南).

That meant easing a ban in place since communists took power at the end of the Vietnam War in 1975.

Washington’s (華盛頓) decision to ease the arms embargo against Vietnam and sign a military pact with the Philippines (菲律賓) show the Obama administration’s commitment to deeper security ties with Asia (亞洲).

But Middle East (中東) unrest has undermined hopes of making Asia the heart of US foreign policy.

The shift towards Asia was intended to be President Barack Obama’s signature push in foreign affairs.

As the US disentangled itself from wars in Iraq (伊拉克 ) and Afghanistan (阿富汗), the idea was that it would devote more military and diplomatic attention to the Asia-Pacific (亞太) and US economic interests there.

In reality however, Washington is struggling with the chaotic fallout of the Arab spring, a growing rivalry with Russia (俄羅斯) and the alarming rise of the Islamic State (伊斯蘭國) group, which has led the US to launch airstrikes in Iraq and Syria (敘利亞).

For now, the growing tensions in the South and East China Seas (南和東中國海) and US efforts to counter the rise of an increasingly assertive China appear peripheral concerns. That is why this pivot to Asia gets few people excited in Washington these days.

Obama did not even mention it in a foreign policy speech in May. Further, negotiations on a trans-Pacific trade pact – the main economic prong in the pivot – have been mired by differences between the US and Japan (日本) over agriculture and automobile market access, and by opposition to the pact among many of Obama’s fellow Democrats.

But the government is chipping away at its grand plan for a rebalance to Asia that began within months of Obama taking office in 2009, when the US signed a cooperation treaty with the 10-nation Association of Southeast Asian Nations (東盟).

The US has also taken a more strident stance against Chinese aggression in the South China Sea and some concrete steps to shore up its allies’ ability to respond.

In April, the US signed a 10-year agreement to allow thousands of its troops to be temporarily based in Philippines, 20 years after its bases there were closed.