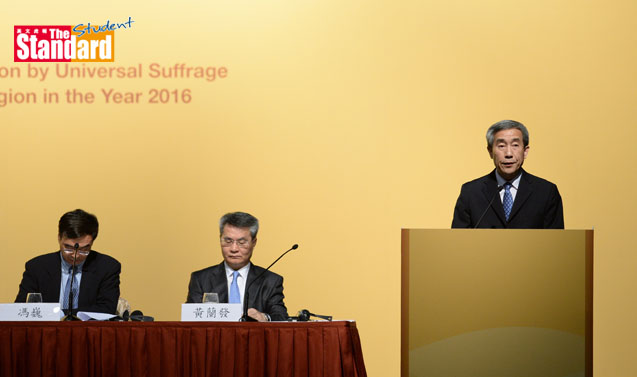 THE framework for future chief executive elections, endorsed by the Standing Committee of the National People’s Congress (NPCSC, 全國人民代表大會常務委員會), requires that candidates first obtain majority backing from a nominating committee.

Li Fei, deputy secretary general of NPCSC, told reporters after the decision was handed down, “This is a legal, fair and reasonable decision. It is a dignified, prudent decision, and its legal effect is beyond doubt.”

Not so, said the pan-democrats, who denounced the framework as “fake” universal suffrage.

She said the NPC had not listened to the views of Hong Kong people and they would not allow government officials to “deceive the world” that Hong Kong has genuine direct elections.

IN its decision, the NPCSC allowed Hong Kong’s chief executive to be selected by one-person-one-vote from the next election, which will take place in 2017.

For the first time, each eligible voter in the territory will have a vote in selecting their head of government.

This is in line with the Basic Law, which provides that the chief executive ultimately be selected by “universal suffrage”.

The NPCSC decision appeared to be a step forward in the further development of democracy in Hong Kong. So, why are the pan-democrats up in arms?

THE complaint is about the Nominating Committee.
According to the NPCSC decision:
• the committee will be modelled after the Election Committee that returned the fourth chief executive;
• it will nominate two to three candidates;
• each candidate must have the endorsement of more than half of all committee
members.


This arrangement, in the view of the pan-democrats, is highly restrictive. They argue that since the committee would be “stacked with Beijing loyalists”, there is no real chance for anyone who does not toe the Beijing line to enter the race.

Such “pre-screening” of candidates is, therefore, “fake democracy”, rendering any direct vote meaningless. Occupy Central elaborated this line of reasoning in a statement: “Genuine universal suffrage includes both the rights to elect and to be elected. The decision of the NPC Standing Committee has deprived people with different political views of the right to run for election and be elected by imposing unreasonable restrictions, thereby perpetuating ‘handpicked politics’. Such a vision for the electoral system will not resolve the controversies about universal suffrage over the years not will it be passed by the Legislative Council.”

Some media in the West also interpreted the NPC’s decision along more or less the same lines as the pan-democrats.

IN a subsequent “explanation” issued under the name of Li, the NPC said implementing universal suffrage “represents a historic progress in Hong Kong’s democratic development”. It is also “a significant change in the political structure” of the SAR.

“Since the long-term prosperity and stability of Hong Kong and the sovereignty, security and development interests of the country are at stake, there is a need to proceed in a prudent and steady manner, so as to prevent all sorts of possible risks that may arise therefrom,” the statement continued.

Li told reporters the change was a first step, and the selection methods could be further amended if so required by the actual circumstances of Hong Kong.

But some fear that the latest decision was the end of the road, as the central government would never endorse a system that could return a chief executive averse to its influence.

Pan-democrat lawmakers have already vowed to reject the changes.

If that happens, the existing system of chief executive election will continue, and some will blame the pan-Democrats for dashing their universal suffrage dream.

THE Basic Law provides for the setting up of a nominating committee, and the NPC Standing Committee’s decision laid down the details.

If there is a problem with this set-up, can the Basic Law be amended to do away with the nominating committee? There are procedures to amend the Basic Law, but one has to be very careful with this.

The Basic Law is Hong Kong’s mini-constitution, and must not be lightly tinkered with. Amending it without the strongest reason could open the floodgate for similar requests from all factions.

ACTIONS against the NPCSC decision have already started. Protests and rallies were staged at different locations, including the venue at which Li hosted a media briefing. There were also class boycotts, and Occupy
Central organisers vowed to fight on.

But it seems unlikely that these actions will change the NPCSC’s decision, as Li has stressed.