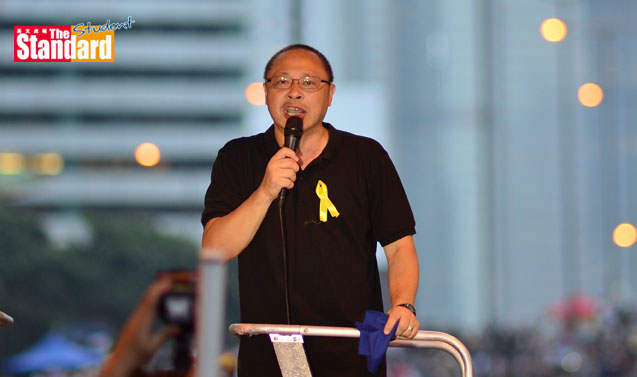 Tai made the remark after a group of Occupy volunteers tried to remove some of the metal barricades outside the government headquarters in Tamar (添馬艦).

Others were dismayed at this action and claimed the barriers were put up to prevent the police from clearing the site.

“Through mutual trust and discussion among ourselves, with the same object, all these problems can be solved,” Tai said.

He said there are many community groups and citizens who joined voluntarily.

Tai said that they will think about how to prolong the campaign and get citizens to accept their way.

Meanwhile, the dean of the Chinese University’s Faculty of Medicine (中文大學醫學院), Francis Chan Ka-leung (陳家亮), revealed in a letter on the internet that some of the medical students who had joined the protests called him at 3am to ask for help and counselling.

“I have been in unspeakable agony with all the developments,” Chan said.

“When I saw the class boycott turning into a full-scale confrontation between police and protesters and when the police fired tear gas canisters into the crowd, my heart sank.

“There were several instances when my telephone conversations with students were suddenly cut ... my anxiety had reached a point that I felt like an ant in a hot frying pan.

“As of this point in time, I am glad that no students were injured or arrested.

“I exhort them to make use of this opportunity to reflect on how to pursue an ideal, just and righteous society.”

Chief Executive (行政長官) Leung Chun-ying (梁振英) and Chief Secretary for Administration (政務司司長) Carrie Lam Cheng Yuet-ngor (林鄭月娥) appeared in a press briefing at Government House (禮賓府) to offer an olive branch to the protesters. But that offer was rejected after anti-Occupy protesters attacked students and the police were accused of reacting slowly.

He appointed Lam to start a dialogue on political reform with Federation of Students’ (專上學生聯會) representatives as soon as possible.