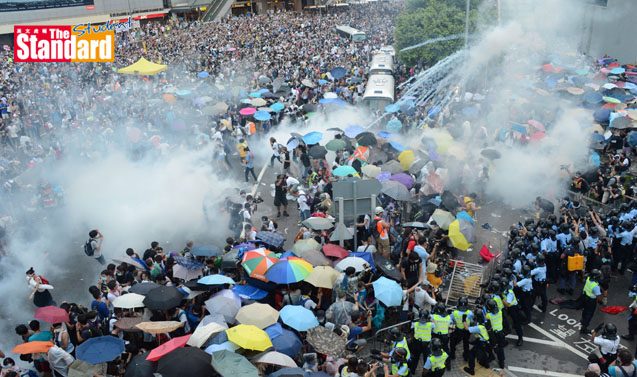 Earlier, police fired at least 10 canisters of tear gas, which was last used in Hong Kong in 2005, as chaos reigned.

The effect of the gas was immediate. White gas filled the air after loud cracking sounds were heard. Protesters ran from the cordon of police, who wore helmets, goggles and gas masks. But when visibility returned minutes later, the protesters came back, each time more prepared.

The Federation of Students (專上學生聯會) set out an ultimatum that if the government did not respond to the protests by Wednesday morning, classroom boycotts would be extended “forever”.

The Confederation of Trade Unions’ (職工會聯盟) Lee Cheuk-yan (李卓人) urged workers to go on strike on Tuesday. Police released tear gas near the City Hall (大會堂) in Central on Sunday night as the protests at Beijing’s (北京) hard line on Hong Kong democracy were spreading.

The escalation came after hours of a standoff between the police and protesters of Occupy Central (佔領中環) at the entrance to Tim Mei Avenue (添美道) in Tamar (添馬艦), which organisers pledged to seize as part of their civil disobedience movement.

Before the first pepper spray was used, Commissioner of Police (警務處處長) Andy Tsang Wai-hung (曾偉雄) told a media briefing, “I believe to try to tie acts of violence to whether or not one is armed is a rather unwise proposition.”