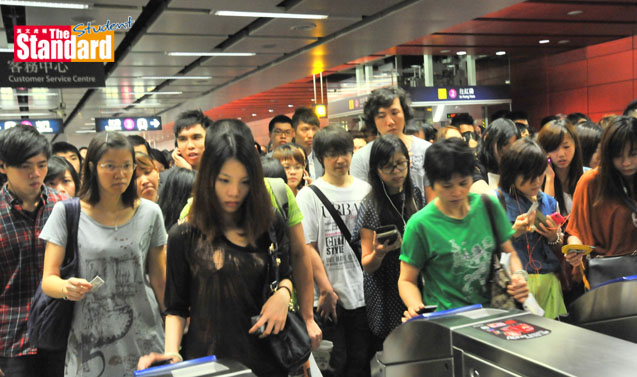 THE HK$110 billion plan to build seven rail lines within eight years from 2018 is flawed as the system will not be able to cope with growing passenger numbers, the chairman of the Legislative Council’s (立法會) railway subcommittee said.

Michael Tien Puk-sun (田北辰) said the plan had not taken into consideration future passenger growth arising from the proposed third runway at the airport and the completion of the Hong Kong-Macau-Zhuhai Bridge (港珠澳大橋).

Tien criticised the government as being “shortsighted” because there is only one rail harbour crossing in Hong Kong Island West (港島西).

Tien said that according to the proposal the northern link, the South Tuen Mun (屯門南) extension line and Hung Shui Kiu (洪水橋) stations will all be linked to the West Rail Line (西鐵.).

“It will be difficult to handle the growth of passengers even if trains and carriages are added on the West Rail Line as capacity will be exceeded in 11 to 12 years.”

He said it takes 10 to 20 years to complete an entire railway project from its planning. “If we start today, it may be completed in 2034. But the government report does not say what happens if the West Rail reaches capacity,” Tien said.

“It has already reached full capacity during peak hours. Even if the northern link and others are established, the situation will remain unchanged. I think it’s a fatal error in the report.”

He suggested there should be a new cross-harbour line linking Tuen Mun, Sunny Bay (欣澳) and the proposed artificial islands in central waters.

Tien said pedestrians and the Light Rail (輕鐵) now share the road transport system. But the growth in population will increase the competition for road space, putting passenger safety at risk.

Hung Wing-tat (熊永達), associate professor in the department of civil and structural engineering at the Hong Kong Polytechnic University (香港理工大學), said the proposal has room for improvement.

He said one option is to build an extension line in Po Lam (寶琳) station in Tseung Kwan O (將軍澳) , linking the rail network to the Hong Kong University of Science and Technology (香港科技大學).

The Express Rail Link should be linked to Kam Sheung Road on the West Rail, he added.