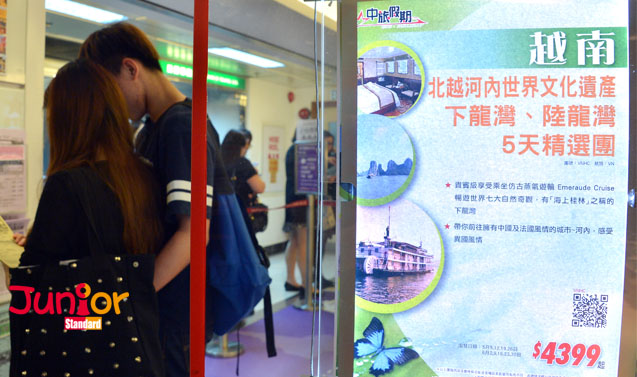 A NUMBER of travel agencies last Thursday cancelled tours to Vietnam (越南) after the SAR government raised the travel warning from amber to red due to anti-China riots.

EGL Tours (東瀛遊) spokesman Huen Kwok-chuen (禤國全) said it has two groups comprising 40 people still in Vietnam. All of them are safe as their itinerary is far from the protest areas.

But all other tours due to leave before 31 May, involving around 60 people, will be cancelled. Customers can get refunds or switch to other tours.

Worldwide Package Travel Service (縱橫遊) has cancelled five tours due to leave for Vietnam before 23 May, affecting around 100 people.

Tour guides have told tourists in Vietnam to keep a low profile, and stickers written in Chinese on coach windows have been removed.

A regular traveller surnamed Poon is pushing the government to raise the travel alert to black. She contacted the Security Bureau (保安局) and asked staff to change the travel alert.However, she claimed she was told that people are dying everywhere and that the situation in Vietnam is not as bad as reported.

Poon said she was worried as her brother and his family were due to leave for Vietnam last Friday but was glad when told the trip had been cancelled.