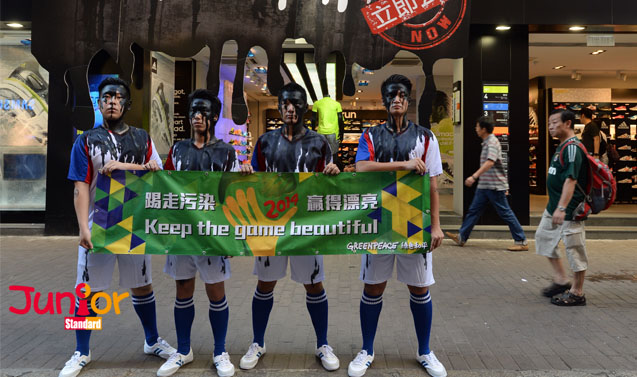 SHOES, gloves and footballs produced by leading manufacturers to coincide with the Fifa World Cup 2014 contain harmful chemicals, according to environmental organisation Greenpeace(綠色和平組織).

More than 80 percent of the sports shoes and half the gloves taken from 16 places around the world showed traces of harmful substances.

Football boots and balls were tested for dimethylformamide (DMF). DMF is a chemical used as an industrial solvent and it can damage the liver.

Greenpeace said it obtained samples from well-known brands such as Adidas, Nike and Puma. All of the products carried the names of footballers or teams playing in the World Cup.

All 21 pairs of football boots tested positive for DMF. Nineteen of them contained levels above the acceptable limit. Nike Mercurial shoes from Germany (德國) had the most DMF.

Greenpeace activist Kate Lin Pui-yee (連佩怡) said these chemicals found in fabrics and clothing are a prevailing problem. They could cause harm to the health of athletes and the environment.

She said different regions have different regulations, which makes it difficult to monitor the use of such chemicals.

She said the laboratory report was officially issued worldwide. Greenpeace is still waiting for replies from the companies.

(photo caption: Greenpeace activist said these chemicals found in fabrics and clothing could cause harm to the health of athletes and the environment.)