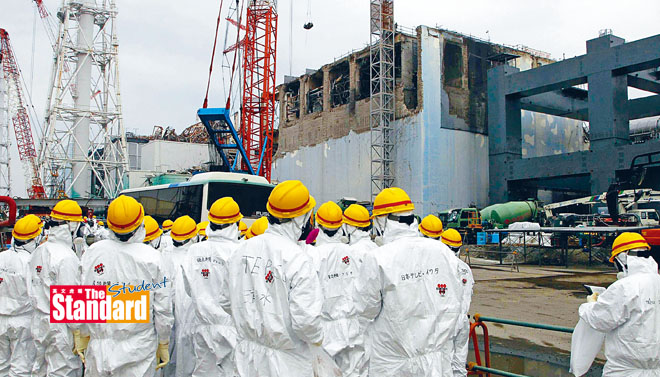 They are seeking damages over the Fukushima (福島) atomic disaster, the lead lawyer said on Wednesday.

The claimants from Japan and 32 other countries including the United States (美國), Germany (德國) and South Korea (南韓) want the US and Japanese (日本) nuclear power plant suppliers to pay compensation, lawyer Akihiro Shima told media in Tokyo (東京).

His comments came one day after the third anniversary of the world’s worst nuclear disaster in a generation.

The filing asks for a largely symbolic 100 yen (HK$7.56) per claimant. It was described by Shima as the first lawsuit to be brought against nuclear power-plant suppliers over the 2011 accident.

It alleges that the firms did not make necessary safety updates to the stricken site, which was swamped by an earthquake-sparked tsunami. Embattled plant operator Tokyo Electric Power is facing massive lawsuits and compensation costs.

“The lawsuit is intended to bring attention to the system that protects the nuclear industry around the world,” it added.

The lawsuit was first filed in Tokyo District Court in January with just over 1,000 claimants, but many more have joined as word has spread.

Under Japanese law, nuclear plant suppliers are usually exempt from damage claims in the event of an accident.

“It is not our policy to comment on pending legal actions,” GE’s Japanese unit said in a statement.

But it added that the plant, which GE helped design, “has performed reliably for more than 40 years”.

Japan on Tuesday marked the third anniversary of the quake-tsunami disaster which swept away 18,000 victims, destroyed coastal communities and triggered a nuclear crisis. Remembrance ceremonies were held in towns and cities around the disaster zone and in the capital Tokyo.

Nuclear dilemma...
CHINA is coming to a crossroad...