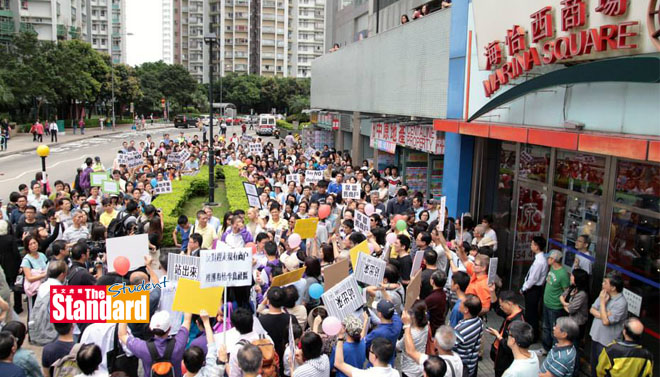 ABOUT 1,000 residents of South Horizons (海怡半島) in Ap Lei Chau (鴨脷洲) and politicians demonstrated around the nearby mass-market retail mall Marina Square (West) (海怡廣場西翼) that may be turned into a high-end shopping outlet for mainland tourists.

Urging the Taiwanese (台灣) landlord to halt its plan and not to evict existing small tenants, two groups of residents led by the Civic Party (公民黨) and People Power (人民力量) protested around the four-story mall for about two hours from 11am last Thursday.

With banners and signs saying “Say no to outlets” and “Serve our community first”, the protesters expressed their concern that the landlord is planning to attract mainlanders by bringing in more outlets of luxury brands, as has been done at the nearby Horizon Plaza (新海怡廣場).

MTR South Island Line (East) (港鐵南港島綫東段) is expected to be completed next year. Last month, about 30 small tenants at the west mall that has provided goods and services for residents for the past 10-20 years received a letter from property management firm Savills (第一太平戴維斯). Their rents were either raised by up to a third or they were told their contracts would be terminated in early May, July or October.

Yuen said she will assist about 30 tenants to send letters to the mall owner, urging it to help relocate them. She added that a survey conducted by her party found 96 percent of the 709 respondents said they opposed the outlet plan.

However, the New People’s Party’s (新民黨) Judy Chan Ka-pui (陳家珮), who did not join the demonstration, said the public should be more realistic, stressing that Prada is innocent.

She said she will ask the landlord to directly talk to residents this week. She has already helped four doctors find premises for two more years from September in other vacant shops.

She said Savills had said the mall would not be turned into an outlet at this stage.