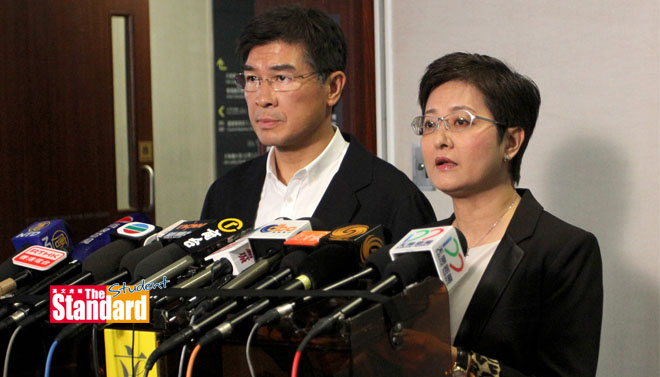 The meeting with Zhang was scheduled for yesterday but lawmaker Sin Chung-kai (單仲偕) said the party needs time to consider its position in the alliance and whether to raise a motion of no-confidence against People Power (人民力量) and the League of Social Democrats (社會民主連線).

Party members are to meet today to decide whether or not to quit the alliance.

Sin earlier criticised radical groups for promoting the political reform proposals put forward by student groups and People Power instead of the one put forward by the alliance and which they had promised to support.

“The Democratic Party might withdraw from the alliance if there is no proper explanation,” he said.

His colleague, Helena Wong Pik-wan (黃碧雲), said the party believes it is necessary to continue a dialogue with the central and SAR governments, as well as the pro-establishment camp, but that the political environment has changed and relations between members of the alliance have become intense.

She added that the party considering its position for the future is more important than meeting with Zhang.

“Occupy Central (佔領中環) organisers selected the three proposals by screening; it means Hongkongers do not have much choice on 22 June,” he said.

He admitted the pan-democrats are divided, with one section insisting on civil nominations for the chief executive election and the other willing to accept other options.

“It’s normal for different people to have different views toward the three-track system,” he said.

In another sign of division, Sin said the party is willing to sit down with former chief secretary for administration Anson Chan Fang On-sang’s (陳方安生) HongKong 2020 (香港2020) and a group of 18 academics whose political proposals do not include civil nomination.