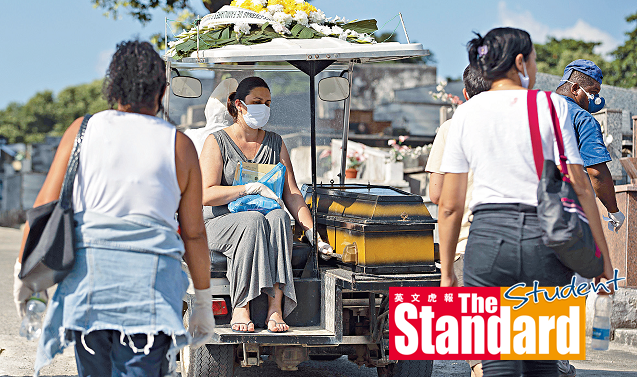 BRAZIL (巴西) is emerging as the next potential major hot spot for the coronavirus amid President Jair Bolsonaro’s insistence that it is just a “little flu” and that there is no need for the sharp restrictions that have slowed the infection’s spread in Europe and the US.

While some US states and European countries are moving gradually to ease their limits on movement and commerce, the intensifying outbreak in Brazil – Latin America’s biggest country, with 211 million people – has pushed some of its hospitals to the breaking point, with signs that a growing number of victims are now dying at home.

“We have all the conditions here for the pandemic to become much more serious,”said Paulo Brandao, a virologist at the University of Sao Paulo.

Brazil officially reported about 4,500deaths and almost 67,000 confirmed infections. But the true numbers there, as in many other countries, are believed to be vastly higher given the lack of testing and the many people without severe symptoms who have not sought hospital care.

Some scientists believe over 1 million in Brazil are probably infected. The country is heading into its winter season, which can worsen respiratory illnesses.

Worldwide, the death toll has topped 210,000, according to a tally by Johns Hopkins University. The number of dead in the US surpassed 55,000 – close to the 58,000 US troops killed during the Vietnam War. Italy (意大利), Britain, Spain (西班牙) and France (法國) accounted for more than 20,000 deaths each.

In Brazil, Bolsonaro has disputed the seriousness of the coronavirus and said people need to resume their lives to prevent an economic meltdown. But most state governors in the country have adopted restrictions to slow the spread and pushed people to stay at home.

In mid-April, Bolsonaro fired his popular health minister after a series of disagreements over efforts to contain the virus, replacing him with an advocate for reopening the economy. Residents protested, leaning out their windows to bang pots and pans.

Medical officials in Rio de Janeiro and at least four other major cities have warned that their hospital systems are on the verge of collapse.

Officials in Sao Paulo – the largest city in South America, a tightly packed metropolitan area of over 21 million residents, many of whom are living in poverty – have issued death certificates in late April for 236 people who succumbed at home, double the number before the outbreak, according to the SAMU paramedic service.

Manaus, an Amazon city of 1.8 million, recorded 142 deaths on 26 April, the most yet, including 41 who died at home. Brazil’s funeral industry warned that the city was running out of coffins and “there could soon be corpses left on corners”.