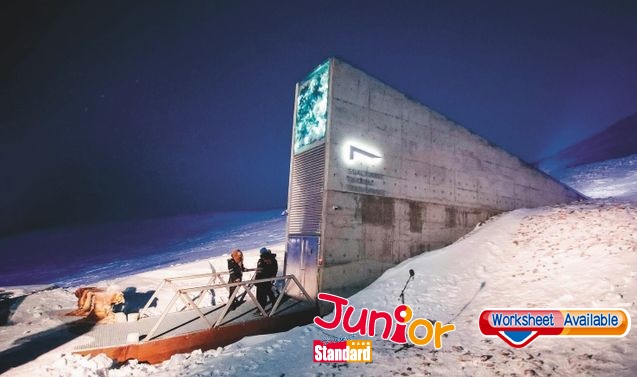 Mounting concern over climate change and species loss is driving groups worldwide to add their seeds to the collection inside a mountain near Longyearbyen on Spitsbergen Island in the Svalbard archipelago in Norway (挪威), about 1,300 km from the North Pole (北極).

The‘Noah’s Ark’of food crops is set up to preserve plants that can feed a growing population facing climate change.

“As the pace of climate change and biodiversity loss increases, there is new urgency surrounding efforts to save food crops at risk of extinction,” said Stefan Schmitz, who manages the reserve.

A total of 36 regional and international institutions have contributed to the 60,000 samples that were deposited on 25 February. The new arrivals include staple crops such as wheat and rice, as well as wild varieties of European apple trees.

The seed store was launched in 2008 with financing from Norway with the aim of safeguarding biodiversity in the face of climate change, wars and other natural and man-made disasters, earning it the nickname ‘doomsday vault’.

Its usefulness was spotlighted in 2015 during the civil war in Syria (敘利亞) when researchers were able to retrieve from the vault duplicates of grains lost in the destruction of Aleppo.

(This article is published on Junior Standard on 5 March 2020)

Inside the Doomsday Vault – Time