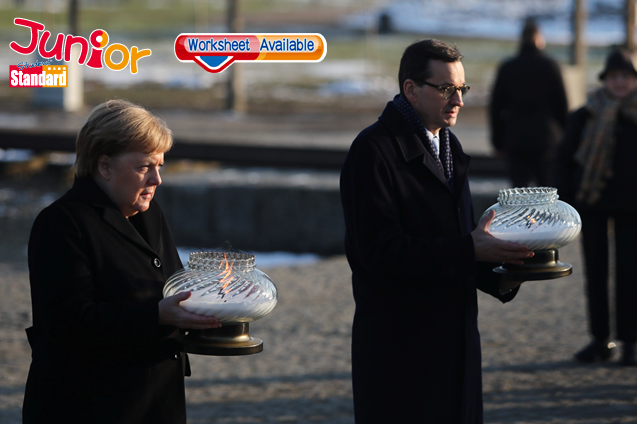 ANGELA Merkel visited the former AuschwitzNazi death camp on 6 December for the fi rst time as chancellor and said admitting Nazi crimes was a key part of Germany’s (德國) identity that could combat growing anti-Semitism.

“Remembering the crimes ... is a responsibility which never ends,” Merkel said during the visit, in a message aimed at calls from the German far-right to shift away from a culture of remembrance and atonement.

“To be aware of this responsibility is part of our national identity, our self-understanding as an enlightened and free society,” she added.

She expressed Germany’s “deep shame” at what happened in Auschwitz and neighbouring Birkenau,where a million Jews died between 1940 and 1945.

“I bow my head before the victims of the Shoah,”she said, speaking in front of Polish (波蘭的) Prime Minister Mateusz Morawiecki and a survivor of the camp, 87-year-old Bogdan Stanislaw Bartnikowski.

The 65-year-old chancellor, who was born nine years after the end of World War II, also addressed a rise of anti-Semitism and other hate crimes in Germany in recent years, saying they had reached an “alarming level”.

“To combat anti-Semitism, the history of extermination camps has to be shared, it has to be told,” she said.

In total, 1.1 million people were killed at Auschwitz-Birkenau, including non-Jewish Poles and anti-Nazi fighters.

(This article is published on Junior Standard on 19 December 2019)