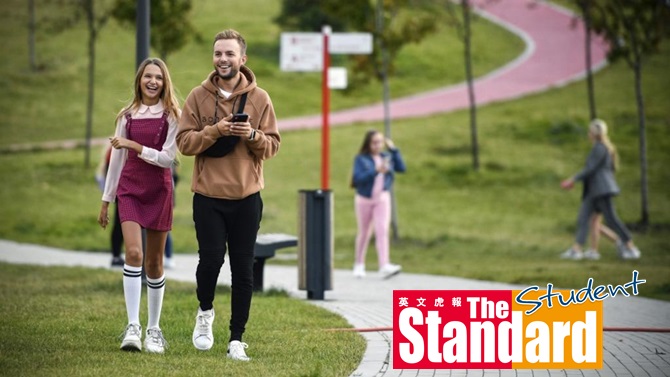 LIZA Anokhina was 11 years old when people started recognising her on the streets. Now, a year later, she is one of Russia’s (俄羅斯) most popular child bloggers, boasting 2.3 million followers on Instagram.
In a Moscow (莫斯科) park, her producer Ivan Bushmelev jogs backwards, using his phone to film as Anokhina runs and blows raspberries. Tall, slim and wearing thick makeup for the shoot, she squeals with laughter when she views the result.
Russia counts some 40 million Instagram users, behind only Indonesia (印尼), India (印度), Brazil (巴西) and the United States, according to data fi rm Statista.
And the photo-sharing platform is, as elsewhere in Europe (歐洲), particularly popular among children, analysts say.
Instagram and other platforms have spawned a generation of young influencers, leading to concerns that parents might exploit children for financial gain.
Another risk is that the desire to accumulate ‘likes’ may be psychologically damaging for children.
Such concerns have forced social media companies themselves to react, with YouTube and Instagram moving to make such blogs less attractive to advertisers and to make ‘likes’ invisible to users other than the creators.
Yet many Russian parents encourage their children to blog and even send them to classes to improve their skills.
The youngest child bloggers unwrap toys or sweets. Older ones like Anokhina speak on camera and film sketches. They earn money from ads and by promoting products, as brands value their connection with their peers.
Anokhina vows to keep on creating content, even as social media platforms prepare to bring in changes that could hit her channels.
To combat cyber-bullying, Instagram is experimenting with hiding the number of ‘likes’ on others’ posts. And from next year YouTube will bar targeted ads in videos aimed at children.
“It is a problem because of the way viewers are: they’re used to seeing numbers,” Anokhina’s producer says of the potential Instagram changes. “Not just viewers but advertisers, too.”
In the eyes of Moscow-based child psychologist Viktoria Karavayeva, top child bloggers, just like school sports stars, could possibly develop a “dependence on popularity – that is, likes, comments, people talking about them”.
This could lead to a “dependence on outside reactions and approval, [and a] tunnel vision only on this,” she said.
While it is normal for teenagers to value their peers’ esteem, those who are “very sensitive to comparisons and outside judgement” may come to crave online likes, she said.

Parents pass on...
PARENTS expect to pass on an a...