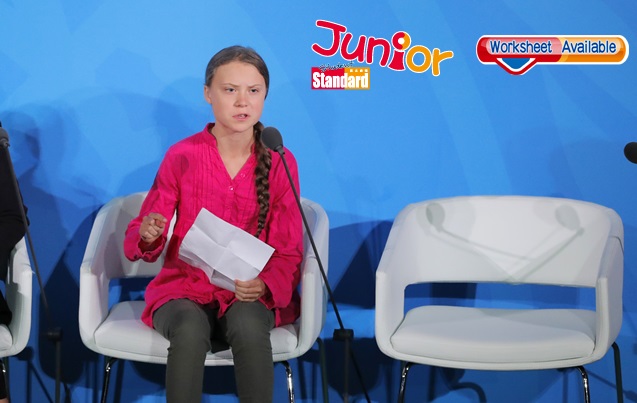 TEENAGE activist Greta Thunberg angrily denounced world leaders for failing to tackle climate change, unleashing the outrage felt by millions of her peers in the heart of the United Nations (聯合國) by demanding: “How dare you?”
The Swedish (瑞典的) campaigner’s brief address electrified the start of a summit aimed at mobilizing governments and businesses to break international paralysis over carbon emissions, which hit record highs last year despite decades of warnings from scientists.
“This is all wrong. I shouldn’t be up here. I should be back in school on the other side of the ocean yet you all come to us young people for hope. How dare you?” said Thunberg, age 16, her voice quavering with emotion.
“You have stolen my dreams and my childhood with your empty words,” she said.
Inspired by Thunberg’s solitary weekly protest outside the Swedish parliament a year ago, millions of young people poured onto the streets around the globe on 20 September to demand governments attending the summit take emergency action.
“I think that no political decision maker can remain deaf to this call for justice between generations,” French (法國的) President Emmanuel Macron told the UN Climate Action Summit.
UN Secretary-General Antonio Guterres had warned leaders only to turn up if they came armed with concrete action plans, not empty speeches.
“Nature is angry. And we fool ourselves if we think we can fool nature, because nature always strikes back, and around the world nature is striking back with fury,” said Guterres.

(This article is published on Junior Standard on 02 October 2019)