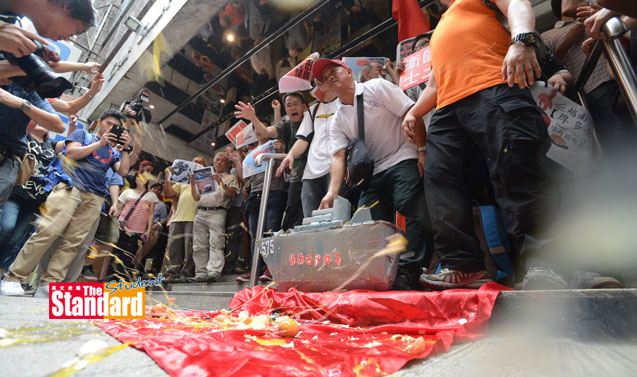 NEARLY 2,000 Chinese were evacuated from riot-hit Vietnam (越南) by sea on Monday, with another two ships following, as Hanoi (河內) stifled more protests over a territorial dispute and foreign investors counted the cost.

The passenger vessels Wuzhishan (五指山號) and Tongguling (铜鼓岭號) left the central Vietnamese port of Vung Ang (永昂), each with more than 900 evacuees on board, Xinhua News Agency (新華通訊社) reported. They were among four Chinese ships – each with a capacity of about 1,000 people – sent to Vietnam, Xinhua said, with another two on standby.

Workers voiced relief as they boarded the vessels, with some declaring, “Finally home.” More than 3,000 Chinese have already returned home by sea and air.

It also said more than 150 workers were injured.

Two of the four workers working in the plant were burned to death while a third was beaten to death and a fourth died of heatstroke, it said. All of the workers were employed by contractors.

Determined to avoid a repeat of the violence, authorities deployed heavy security in various cities around the country to smother an attempt by activist groups to stage fresh, coordinated demonstrations.

There were no reports of any further disturbances in Vietnam on Monday, and Hanoi was calm, with authorities scaling back the heavy security presence that had blocked access to the Chinese embassy and other key points in the city. “The situation has returned to normal now,” the official Vietnam News Agency said.

Activist groups have said several of their members were detained as they sought to demonstrate.
Protesters threw eggs in demonstrations outside the Vietnamese consulate in Wan Chai on Monday.

Demand for prob...
FAMILIES of those killed or in...