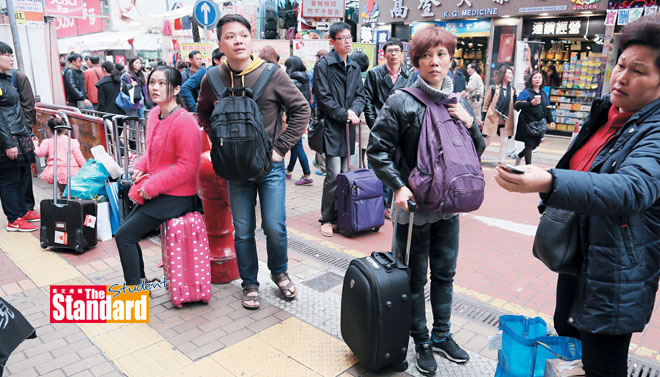 AN idea that mainland visitor numbers could be cut by 20 percent sent a shockwave on Tuesday through businesses that would be affected.

Facing criticism and demonstrations from locals who complain about being crowded off streets, shops selling everyday items having to make way for stores carrying high-priced branded goods and certain essentials being cornered by visitors, Chief Executive (行政長官) Leung Chun-ying (梁振英) had on Monday floated a 20 percent cut in visitors as an option for an official advisory body to consider.

Following up on Tuesday as the storm broke, he said the Commission on Strategic Development (策略發展委員會) was studying whether it was necessary to slow down or halt the growth of mainland visitors.

More than 40.7 million mainlanders visited the SAR last year, with 27.4 million under the individual travel scheme.

Investment house JP Morgan said a 20 percent cut in individual visitors would see the SAR back to the level of two years ago.

Bank of America Merrill Lynch said jewellery groups could face a 5-8 percent drop in sales as more than 60 percent of their customers are mainlanders.

Executive councillor Regina Ip Lau Suk-yee (葉劉淑儀), who sits on the commission, said Leung had asked members what they thought about a 20 percent cut in individual travel scheme numbers, which she believed was aimed at testing the water.

Another commission member said there was a split on whether the cut should be as much as 20 percent, “though most agree there could be a reduction in visitors”. Leung also followed up by saying he had not been advancing a formal proposal by his administration. “We realise that no policy can control the number of tourists,” he said.

Beijing (北京) and Hong Kong officials are already studying how many visitors the SAR can handle, with the focus presently on the individual travel scheme.

Arrivals for this month’s Labour Day Golden Week (五一黃金週) holiday fell for the first time since 2003, when Beijing allowed individuals to travel here.