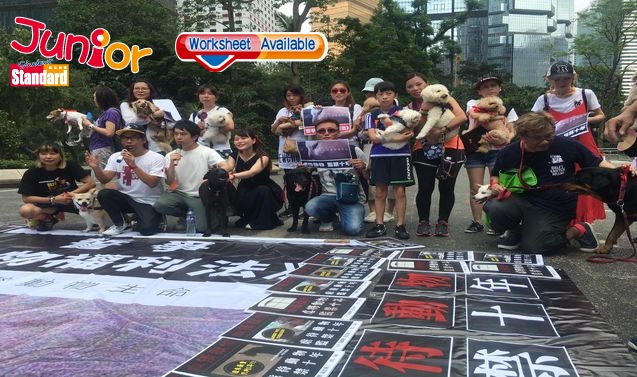 ABOUT 6,000 pet lovers marched under the hot sun in Central, calling for stricter penalties on animal abusers. Organisers believe it was the largest protest for animals in the
city, with the highest number of participants.
Many of the protesters marched alongside their pets. Wearing red ribbons, they proclaimed “stop animal abuse” and “fight for animal welfare laws”.
Democratic Party lawmaker Roy Kwong Chunyu (鄺俊宇), one of the organisers of the protest, said the red ribbons symbolised the blood of animals that have been abused or killed.
“We urge the government to set up an animal welfare law and raise the penalty of animal abusers to a maximum of 10 years in jail plus a fine of HK$2 million,” he said.
Kwong said that the current animal law is outdated, as it was established in 1935.Kwong also called on the Agriculture, Fisheries and Conservation Department (AFCD, 漁護署) to
stop euthanising animals and criticised the government for providing millions of dollars to kill animals every year.
He urged animal lovers to voice their opinions during the three-month public consultation on a new animal welfare law.
Another organiser, the non-profi t Veterinary Services Society (非牟利獸醫服務協會), hopes the government will consider all animals in Hong Kong instead of limiting the scope to
cats and dogs.

(This article is published on Junior Standard on 27 May 2019)