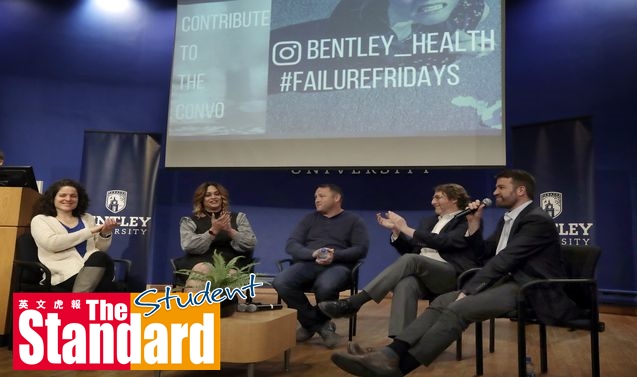 BENTLEY University (本特利大學) has plenty of success stories among its faculty and alumni. But one recent evening, the school invited students to hear about the failures.
Speaking to a crowded auditorium, one professor recounted the time he sank a US$21 million (HK$164m) company. Another recalled failing her college statistics course. One
graduate described his past struggles with drug addiction. Each story reinforced the same message: Even successful people sometimes fail.
“Failure is normal. It’s healthy. And I think people on this panel would argue it actually is transformative,” Peter Forkner, director of
Bentley’s counselling centre, told students. “If you’re not failing, it probably means that you’re not taking enough risks.” Bentley, a private business school near Boston
(波士頓), joins a growing number of US colleges trying to ease students’ anxieties around failure and teach them to cope with it.
On many campuses, it is meant to combat climbing rates of stress, depression and other problems that have been blamed on reduced resilience or grit among younger generations.
Across the country, campus mental health officials report that today’s students appear to have a harder time bouncing back from adversity.
Counselling centres have seen surging demand, often from students overwhelmed by everyday stresses. Professors have raised concerns about students’ fragility when it comes to
receiving bad grades.
Colleges have responded with an array of programmes meant to boost resilience and help students catch up on life skills.
As part of that work, more schools are also striving to normalise failure and create an environment where students can take risks and learn from setbacks.
Stanford University (史丹福大學) encourages its students to celebrate their failures through song, poetry and other creative outlets at an annual event called‘Stanford,I
Screwed Up!’
Harvard University (哈佛大學) has a website sharing rejection letters received by faculty, staff and alumni.
Cornell College (康奈爾大學) in Iowa (愛荷華州) warned professors not to soften their scoring for the sake of students’ emotions. A directive on the issue notes that “a grade
of a ‘C’ or below is not the end of the world”.
“Normalise failure. It’s part of life. It’s one way we learn. Sometimes students need to fail, and not be given an undeserved grade by a sympathetic faculty member.”
Experts proposed theories to explain why today’s students might be struggling.
Some say the pressure to succeed is stronger than ever, making even small failures seem disastrous. Others say social media floods students with images of perfection that make
them feel bad about their own lives.