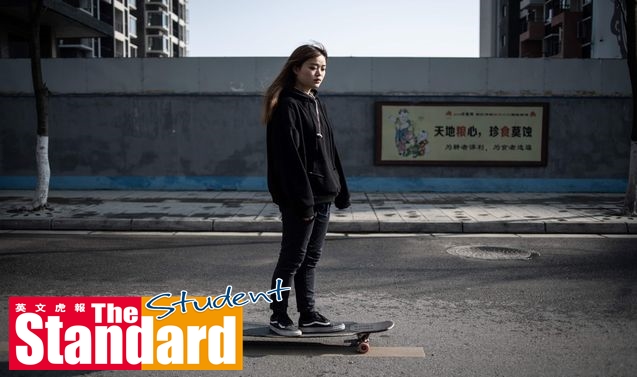 LONGBOARDER Mu Qing (木青) skates through the mega-city of Chengdu (成都) in southwest China, deftly dancing on and off her ride as a friend tails her from behind, filming on a smartphone.
With over half a million followers on social media, Mu, age 21, is one of longboarding’s biggest stars in China.
She is among a growing group of young women in China who are posting videos of their boarding adventures – tens of thousands of views on individual clips is the norm – giving the sport an unprecedented level of exposure.
It mirrors a similar trend in the West where the ‘#girlscanride’ hashtag has gained popularity on social media, as it tags pictures of women doing traditionally male-dominated sports like dirt biking, skateboarding and BMX.
Bigger and easier to manoeuver than a skateboard, a longboard allows for a smoother and more comfortable ride, with many using it in their daily commutes.
On the website Douyin (抖音短視頻), which allows users to post 15-second video clips, Mu puts up footage of herself riding around Chengdu performing stunts – twirling on and off her board – and even outtakes where she falls off.
Her most popular videos attract millions of views.
“In the beginning, I thought [longboarding] was something that only delinquents would be involved in but after I met another female skater, I realised that the sport is not limited to gender,” Mu said.
Street culture elsewhere – which includes rap and graffiti art – is often used to expose social ills or dissatisfaction with the status quo.
But in China, where tattoos and even makeup can be considered politically sensitive or inappropriate, there seems little chance of that happening.
Most of Mu’s skating videos are in a style known as ‘longboard dancing’. Many of her fans from across the country are young and female.
“I am following her style [of skating] now, because I have seen her video, it feels that her style is relatively smooth, unlike someone who always falls off the board,” said Ten, a 17-yearold longboarder based in Beijing (北京).
With skateboarding set to make its debut at the 2020 Tokyo Olympics (東京奧運) and breakdancing to be added to the programme in 2024, urban culture is gradually entering the mainstream.
“Skateboarding and longboarding is not limited to either gender,” Mu said.
“It doesn’t matter if you are male or female, or how old you are; whether you are in the teens, in your 20s, 40s or 50s, you can take part in this sport. There is no restriction to it. I feel that this is a sport that girls can take part in, and girls can do it very well too,” she said.