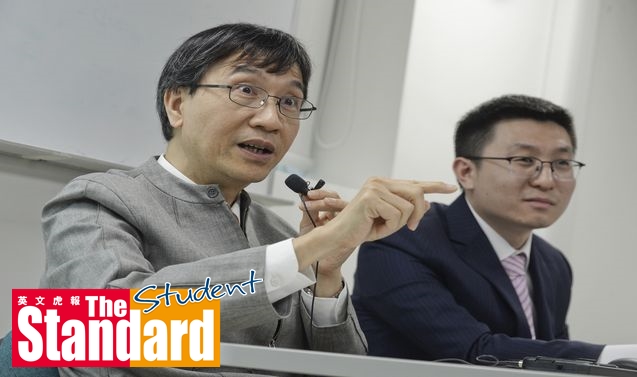 A MEDICAL team at the University of Hong Kong (香港大學) led by Professor Yuen Kwok-yung (袁國勇) and Dr Shuofeng Yuan (袁碩峰) has made a breakthrough discovery in the form of a drug that they claim can cure the flu, avian flu, Severe Acute Respiratory Syndrome (Sars, 嚴重急性呼吸系統綜合症) and Middle East Respiratory Syndrome (Mers, 中東呼吸綜合症).
They said the new drug will stop a virus from replicating inside the human body, and that it also comes with fewer side effects than Tamiflu (特敏福), which cures Sars. It is hoped that clinical trials can be completed in five years and that patients can start using the drug in six to eight years.
Yuen, an infectious disease expert, said his team discovered the mechanism by which viruses replicate in a rapid and quantitative manner, and found a way to break that chain of duplication.
“When a person is i nfected by a virus, it will stimulate the body to produce a large amount of fatty acids, which act like a fuel for the virus to quickly replicate itself, Yuen said.
“It prompted us to think, what if we can stop the body from producing such high levels of fatty acids so the virus can no longer grow in massive amounts?”
He said his team found that when a virus infects a person, it will stimulate a protein called SREBP in the body, which attaches to the human DNA to generate fatty acids.
In an experiment, Yuen’s team injected H7N9 and the Mers virus into mice and subsequently supplied them with an antiviral substance called AM580.
“AM580 acts as an inhibitor and prevents the SREBP from attaching to the human DNA, making it unable to generate a large amount of fatty acids for the virus to replicate,” Yuen said.
As the virus fails to duplicate, it will naturally be wiped out by white blood cells, causing a person to gradually recover from the infection.
Yuen said in the experiment for H7N9, about 60 percent of the mice who were given the AM580 drug survived.
As for the Mers virus, all of them provided with the AM580 injection survived.
Yuen said the drug comes with no side effects, and can be applied as a nasal spray or through an injection in the abdomen, depending on the type of virus. Yuen said his team will conduct further experiments on monkeys and humans to confirm the effects of using AM580.
Asked if the drug will come with a hefty price tag, Yuen said: “I don’t think it’ll be expensive, as it is a broad-spectrum treatment that targets all viruses of the same duplication mechanism and would benefit many patients.”
Yuen said the research team has taken out a US patent on its finding and some investors have already expressed an interest in manufacturing the medication. He said he is optimistic that this could get underway within five years.

‘Tiger’ sight...
A MASSIVE hunt was launched in...