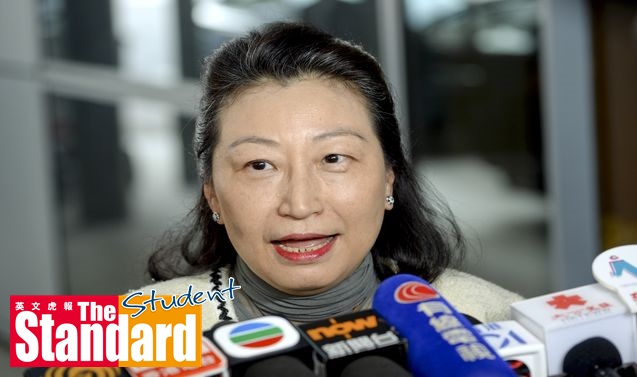 SECRETARY for Justice (律政司司長) Teresa Cheng Yeuk-wah (鄭若驊) stood by her decision not to invite outside legal advice in the controversy over Leung Chun-ying (梁振英), saying it was department policy unless a member of the department was involved.
The Department of Justice (DOJ, 律政司) announced on 12 December that former chief executive Leung would not be prosecuted for receiving HK$50 million from the Australian firm UGL “solely based upon insufficiency of evidence”.
Cheng had been away during this time but returned from leave on 26 December.
She was accused of being evasive, but Cheng said her leave application was filed early – “it has nothing to do with evasion”.
She said there was no need for the department to seek external advice if no colleagues were involved. “Unless the case involves a member of the DOJ, there would not be outside counsel engaged,” Cheng said. “Why should we seek external advice if there is no conflict of interest and obvious partiality? Because we should shift the burden? No, we should have the sense of responsibility.”
Cheng denied that Leung’s status as the vice chairman of the Chinese People’s Political Consultative Conference (中國人民政治協商會議) had anything to do with the procedure.
The way the department handled the UGL case differed from past practice on whether to prosecute incumbent and former officials. The department consulted external legal advice before deciding not to prosecute.
Former financial secretary (財政司司長) Antony Leung Kam-chung (梁錦松) had been under investigation for allegedly purchasing a car before he announced increasing the vehicle first registration tax in 2003.
Another case involved former Executive Council (行政會議) member Franklin Lam Fan-keung (林奮強), who allegedly sold two apartments before the government announced measures to tackle fl at speculation in 2012.
Cheng herself was also involved, as the department had to decide whether she should be prosecuted for unauthorised construction at her house in Tuen Mun (屯門).
The department sought legal advice from outside counsel in all three cases, and decided not to prosecute in all of them.
Cheng said she had entrusted the Director of Public Prosecutions (刑事檢控專員), David Leung Cheuk-yin (梁卓然), to handle the case and she was not involved at all.
The principal lecturer of the University of Hong Kong Faculty of Law (港大法律學院), Eric Cheung Tat-ming (張達明), said there were no rules stating that the department should brief out cases when officials were involved, “but it’s a convention since the handover, and justice must be seen to be done.”
But senior counsel Ronny Tong Ka-wah (湯家驊), an Executive Council member, endorsed the non-prosecution decision. “Almost all the so-called criminal elements evolve overseas, and Hong Kong has no jurisdiction over them,” Tong said.

HK on Duterte’...
HONG Kong and the mainland wil...