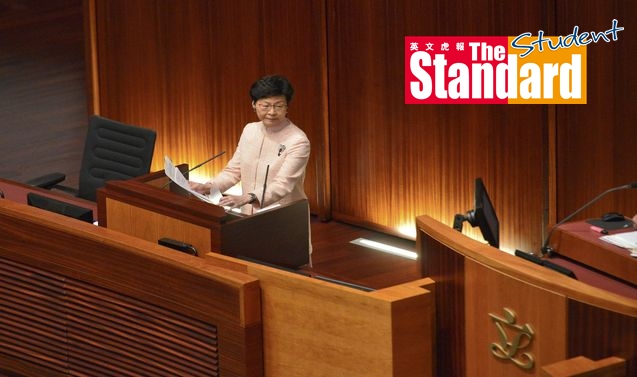 PROTESTS over Eddie Chu Hoi-dick’s (朱凱廸) disqualification as a rural representative candidate led to the cancellation of the chief executive’s questionand- answer session at the Legislative Council.
This renewed calls from the proestablishment camp to amend Legco (立法會) rules and procedures to punish rule-breaking lawmakers.
A monthly Q&A session at Legco was introduced by Carrie Lam Cheng Yuet-ngor (林鄭月娥) after she assumed office. It was the first time it was cancelled as angry lawmakers shouted their discontent about alleged political censorship over Chu.
Chu was disqualified from running in next month’s rural representative election after the returning officer accused him of “implicitly” supporting independence as an option for the self-determination of Hong Kong people.
Before the 5 December session started at 11am, pro-democracy legislators stood outside the chamber, shouting, “political censorship, shame!”
They tailed Lam as she entered the chamber, where they continued bellowing the slogans. This prompted Legco president Andrew Leung Kwan-yuen (梁君彥) to expel Claudia Mo Man-ching (毛孟靜), convener of the pro-democracy camp meetings, within 10 seconds of entering the room. No prior warning was given.
Chu and Raymond Chan Chi-chuen (陳志全), of People Power (人民力量), were the next to be ejected as Leung warned lawmakers they would be thrown out without warning if they raised their voices.
“Please respect the chief executive when she is here,” Leung said. Guards surrounded Mo, Chu and Chan, and tried to remove them from the chamber, but they were stopped by other lawmakers.
Failing to end the chaos, Leung announced the suspension of the meeting. Although it resumed about 10 minutes later, pandemocrats continued to make a commotion, prompting Leung to cancel the session altogether.
Lam said the cancellation was regrettable.“I think it’s a pity that I missed this chance, but I will continue to closely communicate with lawmakers,” she said.
Wong Kwok-kin (黃國健), of the Federation of Trade Unions (FTU, 工聯會), said his party will write to the Committee on Rules of Procedure (議事規則委員會) to resume discussions for tightening Legco rules.
“We took a conservative approach in the past and believed the amendment should be discussed thoroughly. But the situation this time reminded us that the opposition has no self-discipline,” Wong said.
In response, Mo criticised the FTU for having a “leftist toxin in their brains.” She added: “They’re turning the Legislative Council into the National People’s Congress (全國人民代表大會) in Beijing (北京).”