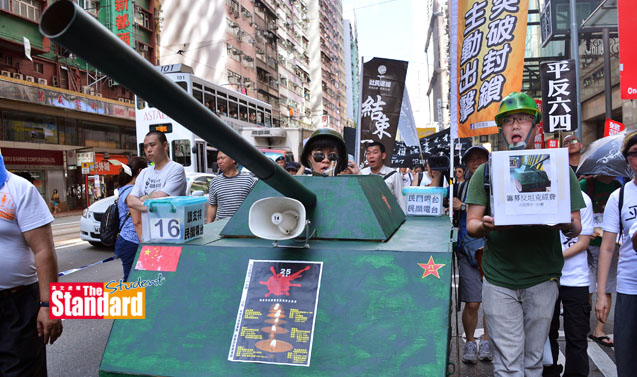 THOUSANDS of people marched from Causeway Bay to Central district on Sunday to remember the crackdown on students in Beijing’s Tiananmen Square (北京天安門廣場), the 25th anniversary of the event.

The demonstrators marched from Victoria Park (維多利亞公園) to the government headquarters, while a separate group continued on to the central government’s liaison office.

They renewed their long-standing demand for the mainland to overturn its official verdict that the protests that ended in bloodshed on the night of 4 June 1989, were a “counterrevolutionary riot”.

One protester dressed up in a tank costume to evoke the memory of “Tank Man” (坦克人), the unnamed man who was famously photographed standing up to a line of tanks.

The protest march was a prelude to an annual candlelight vigil that was held on 4 June to remember the victims. The vigil attracted over 180,000 people in Victoria Park, according to organisers, and was higher this year than usual because it is the 25th anniversary of the crackdown.

“More people will turn out for tomorrow’s candlelight vigil for the Tiananmen crackdown because of criticism from pro-Beijing groups,” said Lee Cheuk-yan (李卓人), chairman of the Hong Kong Alliance in Support of Patriotic Democratic Movements in China (香港市民支援愛國民主運動聯合會), which organised the event.

The alliance had decided on the theme of “Rectify June 4th verdict. Fight till the very end” for this year’s gathering at Victoria Park.

Twenty-five years later, the Beijing government still has not given an official account of the crackdown on the protests, in which hundreds of people had died, if not more. The topic remains a taboo in mainland China.

United Nations human rights chief Navi Pillay has called on China to reveal the truth about the army’s violent suppression of the pro-democracy protests in Tiananmen Square.

She also asked the Chinese authorities to release dozens of people reported to have been arrested just before the anniversary and to stop blocking internet discussions on the issue.