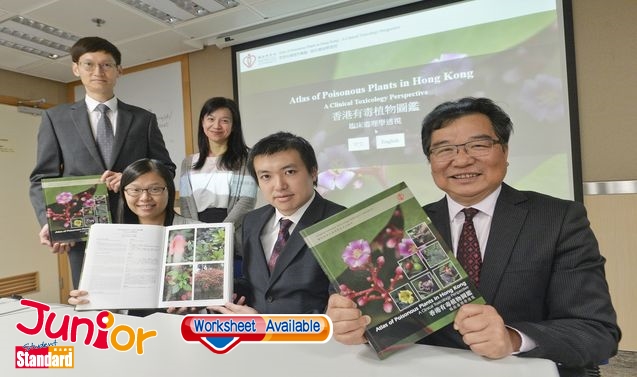 THE Hospital Authority (HA, 醫管局) has issued an online illustrated handbook about poisonous plants in a bid to prevent people from inadvertently poisoning themselves.
The digital version of the Atlas of Poisonous Plants in Hong Kong – A Clinical Toxicology Perspective (香港有毒植物圖鑑) lists 117 types of poisonous plants found in Hong Kong.
The HA reported 30 cases of plant poisoning in the past decade, a third of which involved the use of Gelsemium elegans (?吻), commonly known as heartbreak grass (斷腸草), one of the four most poisonous plants in Hong Kong.
Ingestion of the plant could result in respiratory depression, depression of the central nervous system or even death, said Princess Margaret Hospital’s pathology department chief Tony Mak Wing-lai (麥永禮).
He said in 2007, a woman was severely poisoned and required intubation after ingesting Gelsemium elegans collected in Lantau Island, which she mistook for a non-poisonous Mussaenda pubescens (玉葉金花).
A lot of poisonous plants are hard to identify, like Amanita farinose (小托柄鵝膏菌), a poisonous mushroom, which could cause liver failure or even death.
Mak warned people not to eat unidentified plants to avoid being poisoned.

(This article is published on Junior Standard on 24 April 2018)