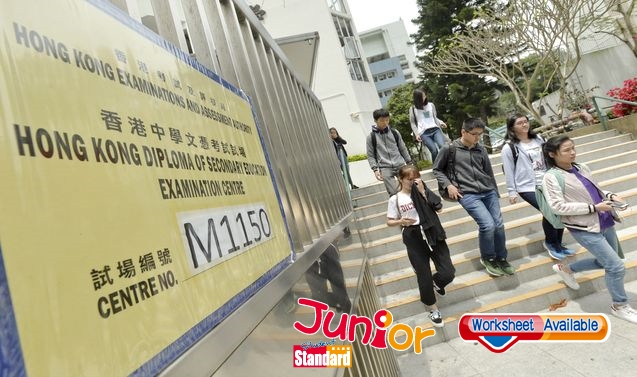 THE Diploma of Secondary Education’s liberal studies (中學文憑試通識教育科) exam has steered clear of politics for the second year running.
Among the three compulsory questions in this year’s exam, students were asked to analyse sources of DSE exam pressure based on information provided, and to elaborate on issues of vocational and professional education in Hong Kong. Another question was about locals joining international volunteer programmes.
Liberal studies exams had previously included questions about political issues. In 2016, for instance, candidates were asked about Hong Kong’s performance in terms of its local democracy and its overall global competitiveness.
A liberal studies teacher said the exam was not difficult overall. He agreed the questions on exam stress and education would not have been easy but said students need not fret over not answering the question on exam stress objectively.
He said topics such as China’s left-behind children and electric cars were newsworthy and would have been in the curriculum of many schools.
But questions on political issues could help make the young more socially aware, and he is concerned that the absence of such questions might become a permanent feature. He said liberal studies should nurture responsible citizens, so students have to know about political issues.

(This article is published on Junior Standard on 19 April 2018)

Should politics be discussed
https://goo.gl/r6YFBU