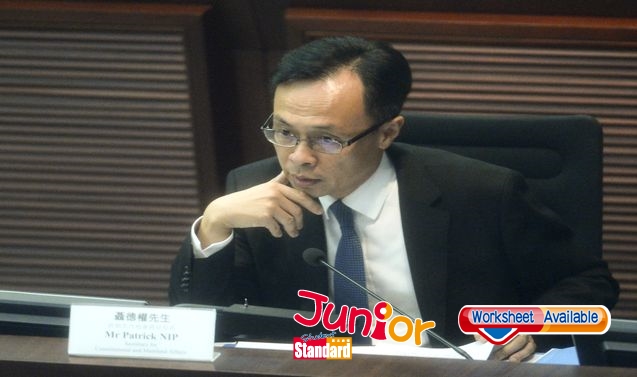 HONG Kong will begin preparing and enacting local National Anthem Law (國歌法) according to the city’s constitutional and legal regime, the Secretary for Constitutional and Mainland Affairs, Patrick Nip Tak-kuen (聶德權), said.
He said preparations will begin after the Standing Committee of the National People’s Congress adopts the decision to add the National Anthem Law to Annex III of the Basic Law.
The mainland is amending its criminal law to punish the guilty with a maximum three-year jail term. Prohibited acts include singing the anthem in a deliberately distorted or derogatory way.
Deputy head of the standing committee’s legislative affairs commission, Zhang Rongshun (法制工作委員會副主任張榮順), said incidents disrespecting the national anthem occurred recently in Hong Kong, which added to the urgency of enforcing the law in the SAR.
Fans booed the Chinese national anthem in an October match, and the Asian Football Confederation has just issued a warning to the Hong Kong Football Association over such conduct. The federation also threatened more serious punishment if repeated.
Hong Kong’s congress delegate Ip Kwok-him (葉國謙) said Hong Kong might take reference from the three years punishment and HK$50,000 maximum fine for any violation of the flag and emblem law.
Lawmaker Dennis Kwok Wing-hang (郭榮鏗) said there should be a three-month public consultation before starting local legislation. The public should discuss issues like what constitutes a breach, and whether conflicts will occur.

(This article is published on Junior Standard on 08 November 2017)