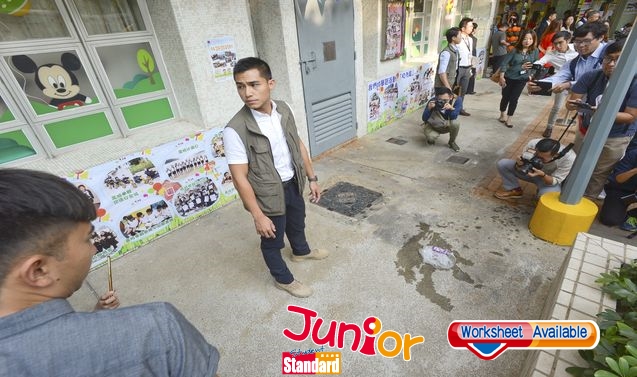 A WATER-FILLED plastic bag splattered about five metres from Chief Executive Carrie Lam Cheng Yuet-ngor (林鄭月娥) after she left a kindergarten in Wong Tai Sin.
But Lam did not react to the “water bomb” dropped outside Lok Shun House (樂信樓) in Tsz Lok Estate (慈樂邨). Instead she simply walked past the burst bag when leaving Ho Lap Kindergarten (可立幼稚園) while escorted by police and continued to meet the press straight afterwards.
It was the first time anything appeared to have been aimed at Lam since she took office in July, when a HKU poll showed her support rating to be 63.7 percent, compared to 59.6 in October.
No one was injured and there had not been an arrest but Wong Tai Sin officers were investigating. Forensic officers were also collecting samples of the bag’s contents.
One witness said she was not surprised by the incident as there have been other cases of objects dropped at the estate. She believed someone could have thrown the water bag after being bothered by the noise around the kindergarten.
Lam had earlier met parents to hear their opinions about a preschool service for kids with problems that serves 11 kindergartners. Parents told her the service has “an obvious effect”, Lam remarked, and “some said it’s a great help to their children”. She promised to create enough places to meet the need of every student. The service aids children suffering from autism, hyperactivity disorder, language disorder or dyslexia.


(This article is published on Student Standard on 02 November 2017)