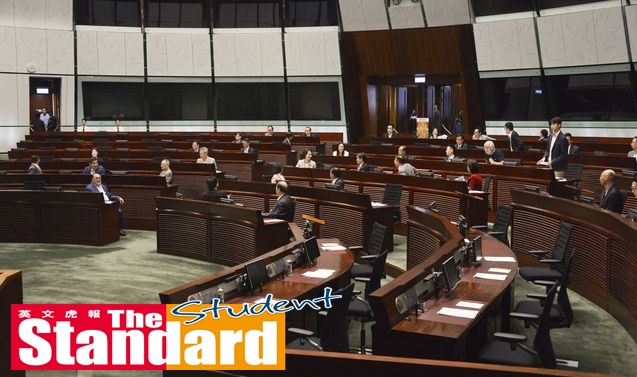 LEGISLATORS backing the administration had last week swept aside filibustering tactics by pan-democrats in the Legislative Council (立法會) to approve the adjournment of the Stamp Duty (Amendment) Bill (印花稅(修訂)條例草案).
However, after it was passed, the meeting was halted due to a lack of quorum.
The bill’s postponement opened the way for the administration to debate the non-binding motion on co-location – an arrangement for mainland immigration and customs officers to be based in Kowloon when cross-border Express Rail Link (廣深港高速鐵路) services start next year – but the pan-democrats successfully blocked it on Wednesday with another filibuster.
On 19 October, pan-democrats had called repeatedly for quorum counts once the meeting began at 9am.
At lunch time, the meeting was close to adjournment when the bell rang for over 14 minutes. But establishment lawmakers dashed into the chamber as the seconds ticked away to keep the meeting going.
The debate for adjourning the stamp duty bill finally went to a vote at 2pm and was approved.
But the pan-democrats did not stop requesting quorums and then were able to get the meeting adjourned by leaving the chamber so just 34 establishment lawmakers remained. And the adjournment set off another round in the blame game.
Council president Andrew Leung Kwanyuen (梁君彥), said it was regrettable and “I have to point out that attending meetings are lawmakers’ responsibilities”.
Such responsibility was not exclusive to any camp, he added, but “you saw who were there and who were not, it’s very clear”.
Charles Mok Nai-kwong (莫乃光) of the Professional Commons (公共專業聯盟) said the administration’s motion to adjourn debate on stamp duty amounted to “politics overriding societal welfare” and it was not the pan-democrats’ fault the meeting was then adjourned. The establishment camp has 40 lawmakers, he noted, and if enough of them had been in the chamber “this would not have happened.”
Claudia Mo Man-ching (毛孟靜) of Hongkong First (香港本土) remarked that the legislature is in a state of war and there was no winner yesterday.
But Starry Lee Wai-king (李慧琼), chairwoman of the establishment-backing
Democratic Alliance for the Betterment and Progress of Hong Kong (民主建港協進聯盟), said the filibustering shows a need to tighten council rules. The democracy front’s frequent quorum calls was the problem, she said.
Paul Tse Wai-chun (謝偉俊), chairman of the Committee on Rules of Procedure (議事規則委員會), said the pan-democrats had bypassed his panel by handing 34 motions to amend legislative rules directly to the council’s secretariat.


(This article is published on Student Standard on 27 October 2017)