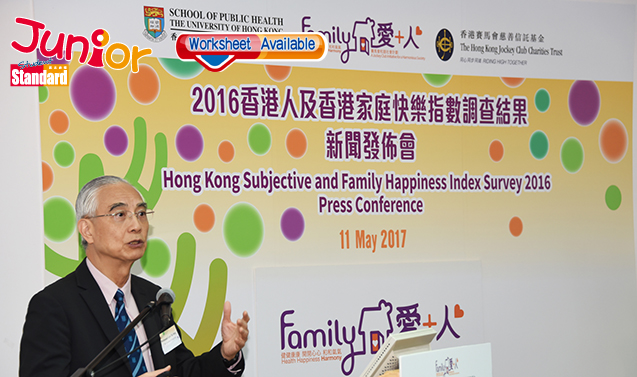 YOUNG people aged between 18 and 24 are the least happy among locals while women aged 45 or above with higher household income could be the happiest, according to a University of Hong Kong (香港大學) survey. The .ndings are not uncommon globally, said Lam Tai-hing (林大慶), chair professor of community medicine.

In the poll, 4,038 people were asked to rate their own happiness on a scale of zero to seven and family happiness from zero to 10. Results showed women were slightly happier than men with scores of 5.24 against 5.04. Women were also more satis. ed with their family – 7.59 to 7.46. People with scores of 5 or above are considered happy.

Young people aged between 18 and 24 were the least happy among all age groups with their happiness rating at 4.86 and family happiness score at 7.08.

Youngsters are generally more insecure as they search for their own identities while the fact that they are under the control of parents and school authorities contributed to their low happiness rating, psychology professor Sonja Lyubomirsky said.

Household income played a role but it should not be a decisive factor, Lam said, adding that spending more time with family can make everyone happier.

(This article is published on Junior Standard on 18 May 2017)

Have Hong Kong’s youth lost hope in the future?
http://goo.gl/EDmlBd