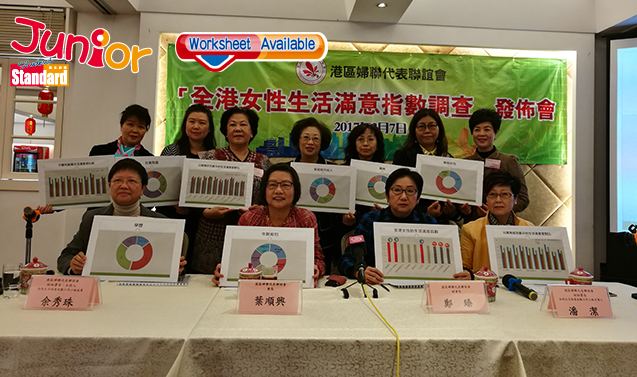 WOMEN in Hong Kong are slightly happier with their lives this year but the overall situation is still unsatisfactory, a survey has found.

The survey was conducted ahead of International Women’s Day (三八婦女節) on 8 March by the All-China Women’s Federation Hong Kong Delegates Association (港區婦聯代表聯誼會). It found the life satisfaction index of women in general rose slightly – from 57.2 out of 100 last year to 57.6.

Observing that the change was not significant, vice secretary general of the association Kitty Poon Kit (潘潔) said, “We think the situation is still not satisfactory. Hong Kong women are still not happy.” Hong Kong women worry most about housing (14.5 percent) and their love life (13.5 percent) among 10 issues listed.

The organisation suggested that the government “recognise, support and reward working women in society and in family”. The government can provide more assistance for women taking care of the elderly at home and encourage employers to implement flexible working arrangements.

Meanwhile, according to the latest Women on Boards Hong Kong Report, the proportion of women board members at 50 of Hong Kong’s top listed companies grew slightly during 2016 – from 11.1 percent to 12.4 percent.

(This article is published on Junior Standard on 14 March 2017)