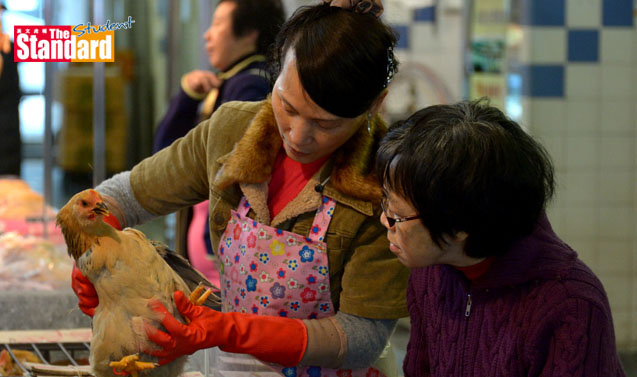 ANOTHER consultation study is being commissioned into the supply of live poultry and the risk of the H7N9 bird flu in Hong Kong.

Secretary for Food and Health (食物及.生局局長) Ko Wing-man (高永文) said on Thursday that his bureau is commissioning a consultant to study the future of the live poultry trade.

The study team comprises scientists from the Centre of Influenza Research (流感研究中心) at the University of Hong Kong (香港大學) as well as state laboratories in Shenzhen (深圳), Shantou (汕頭) and Zhejiang (浙江) in China; Memphis (孟菲斯), Tennessee (田納西州) in the US; and Sydney (悉尼) in Australia (澳洲).

The team of international experts was led by Guan Yi (管軼), a professor of virology at the University of Hong Kong’s School of Public Health (香港大學公共.生學院).

It called on mainland authorities to undertake baseline surveillance so that control and preventive measures can be formulated and implemented to stop the H7N9 threat to public health.

Ko said the study matches government findings, adding that he knows H7N9 circulates and spreads among chickens in the mainland.

“To control this bird flu, Hong Kong needs to control the chain of bird supply either here or from the mainland to mitigate the risk of this virus infecting citizens. This is what the government is doing now,” he said.

A total of 8,735 live chickens from Hong Kong farms were distributed to markets yesterday but no chickens have been imported from the mainland since 6 March, according to Agriculture, Fisheries and Conservation Department(漁農自然護理署) figures.

Meanwhile, data shows local flu activity mainly triggered by the H3N2 strain has continued to decrease but is still above the baseline, the Centre for Health Protection (衛生防護中心) said.

About 100,000 vaccines that match H3N2 flu have been ordered and will be available in Hong Kong late next month and May. More than 350 people have died of the flu this year.