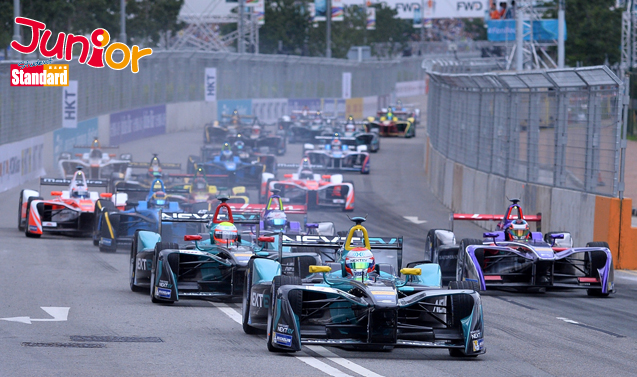 THREE men have been arrested for allegedly flying drones over the venue of Hong Kong’s first Formula E race to film the event.

Three drones were spotted flying over the Central harbourfront venue when the main ePrix race was in progress. Police said the drones seriously threatened public safety.

They said three men were later arrested in the vicinity on suspicion of violating the Air Navigation (Hong Kong) Order 1995 (1995年飛航(香港)令), which bans flying model aircraft near an airport and aircraft approach and take-off paths, including Victoria Harbour and its coastal areas. Violators face up to two years in jail and a fine of HK$5,000.

Grandstand tickets cost HK$2,380 for adults and HK$1,190 for children and seniors.

Some people managed to sneak a peek at the racing along the footbridge on Man Yiu Street (民耀街). Some watched through the windows of the IFC (國際金融中心) shopping mall nearby, even though large pieces of dark cloth covered views of the track.

Police had asked buildings around the course to tighten security to prevent people from gathering on upper fl oors and the rooftop.

Some parking spaces where people could view the race were temporarily closed. Police urged those without tickets not to go to the area.

(This article is published on Junior Standard on 17 October 2016)