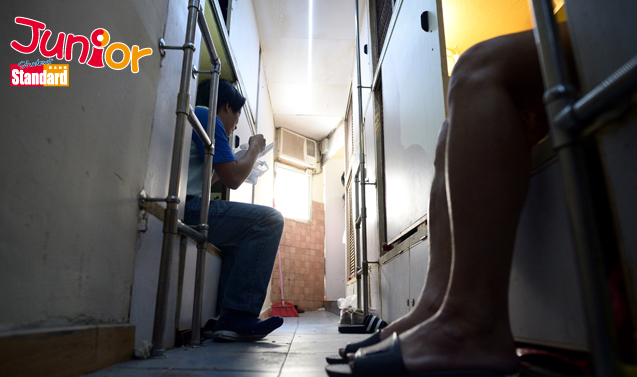 SHENZHEN (深圳) has beaten Hong Kong when it comes to tiny flats. Nine apartments there – with floor areas from 61.6 to 80.5 square feet – were put on the market last weekend.

Priced at 880,000 yuan (HK$1m) each, the minuscule units were sold out in half a day. Netizens called them ‘pigeon coops’ and ‘ant homes.’ They are about half the size of Hong Kong’s smallest flat – a 152-sq ft unit in Jordan.

The nine ‘pigeon coops’ were originally hotel rooms Japan’s coffin apartments are not for claustrophobes and all came equipped with a built-in bed and wardrobe. The developer is also offering 160 other units with a range of 376 to 484 sq ft.

Under Beijing’s building code residential flats must be at least 236 sq ft. But the ‘ant homes’ are exempt because they were built before the code was published in 2012.

Tiny flats are, in fact, common in crowded cities where property is expensive. Flats below 100 sq ft are found in cities like New York, London and Paris. Tokyo has coffin-like units.

Many of these homes are not independent residential units. They are more like Hong Kong’s ‘partitioned flats’ or ‘subdivided flats’ (.房) which are basically rooms in a flat.

(This article is published on Junior Standard on 30 September 2016)