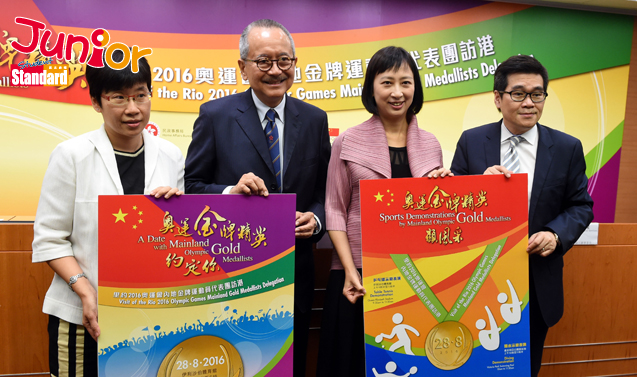 THE national team’s gold medal winners at the Rio Olympics (里約奧運會) will be in Hong Kong for three days from 27 August.

The Leisure and Cultural Services Department (康樂及文化事務署), which is organising the visit, said the smaller Queen Elizabeth Stadium in Wan Chai (灣仔) was chosen instead of the bigger Hong Kong Stadium (香港大球場) due to weather concerns.

The department did not say which athletes will be coming, stating it is waiting for the national team to provide a list of names by the end of the Olympics.

Asked if the visitors would include swimmer Fu Yuanhui (傅園慧) - who became an internet sensation for her reaction after learning she had won a bronze medal - Leisure and Cultural Services director Michelle Li Mei-sheung (李美嫦) said this would depend on the Chinese Olympic Committee (中國奧林匹克委員會) but gold medallists would have priority.

There will be a welcoming ceremony at Hong Kong International Airport (香港國際機場) followed by a cocktail reception and dinner. Three groups of national athletes will meet the public on 28 August.

Visits by China’s gold medallists started in 2004 after the Athens Olympics (雅典奧運會).