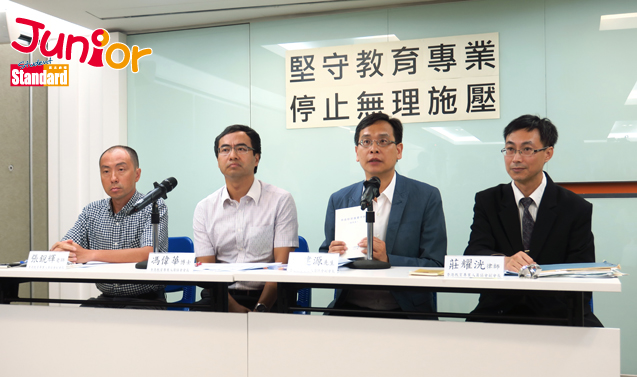 THE Hong Kong Professional Teachers’ Union (PTU, 香港教育專業人員協會) has called on the Education Bureau (教育局) to clarify its threat to disqualify teachers who advocate independence by clearly defining what they should do when they discuss the issue.

The bureau issued a statement on 14 August saying licence revocation could be one of the consequences if teachers promoted independence from China.

In response, PTU president Fung Wai-wah (馮偉華) said the union opposes independence and any teacher who advocates it on campus.

But he believes teachers and students should be allowed to discuss it as a hot social topic.

“Teachers are responsible for helping students think critically in a rational and fair way,” Fung said. “We are not obliged to accept all the government’s views on social issues. In an open society like Hong Kong, people are free to discuss the government’s stance.”

He added the current professional code is already sufficient to regulate teachers’ behaviour, and an extra guideline on independence discussion is unnecessary.

Union vice president Ip Kin-yuen (葉建源) said the word ‘advocate’ in the bureau’s statement is too vague, and may give the impression that teachers could see their licence revoked for even discussing independence in the classroom.

“How does the Education Bureau define ‘advocate’ and ‘discuss’, and what is the difference?” Ip asked. “The line is too vague, while the punishment is so severe. It would be like placing a knife at teachers’ necks.”

Another vice president, Chong Yiu-kwong (莊耀洸), said only teachers found guilty in criminal cases or for violating the professional code were disqualified previously, but none over his or her political stance.

He said if the government suspended teachers, the union will fully support its members.