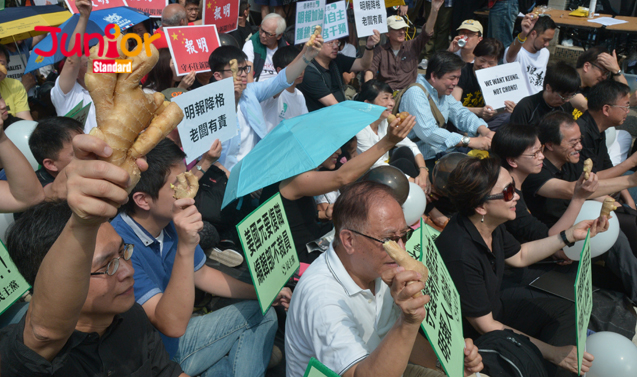 Around 400 people gathered outside the office of Ming Pao (明報) to protest its recent sacking of a veteran editor.

The dismissal triggered concerns about press freedom in Hong Kong.

The dismissal of the newspaper’s executive chief editor Keung Kwok-yuen (姜國元) came after the newspaper published a front-page report on the ‘Panama Papers’ document leak. The leak revealed offshore business dealings of the rich and powerful.

The newspaper said Keung was dismissed to save operating costs.

Hong Kong Journalists Association (香港記者協會) chairperson Sham Yee-lan, (岑倚蘭) read a joint letter from eight journalist groups. The letter said the dismissal indicated a change in the newspaper’s editorial stance. It asked the paper to further explain the dismissal, to replace the present chief editor and to reinstate Keung.

It said the sudden dismissal of Keung is a matter of great concern to the news industry and to society as a whole.

There has been growing anxiety in recent years among many Hong Kong journalists and politicians about the influence of Beijing on the territory.

(This article is published on Junior Standard on 6 May 2016)