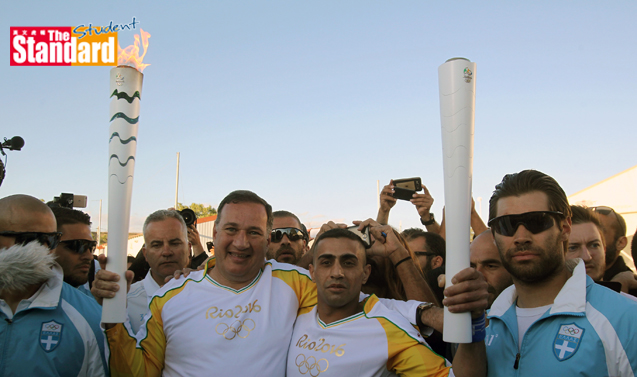 THE city of Rio de Janeiro (里約熱內盧 ) launched the 100-day countdown to the Olympic Games, with government and global sports leaders insisting it will be a landmark occasion despite chaotic preparations and Brazil’s (巴西) political meltdown.

Countdown events were also held around the world and Rio organisers were to take the Olympic (奧林匹克) flame in Athens (雅典) to start the long journey to South America’s (南美洲) first Games which kick off on 5 August.

Ibrahim al-Hussein, a Syrian (.利亞) swimmer who lost part of his leg in a bomb explosion, carried the torch through Eleonas camp (埃里昂納斯難民營) in Athens, where about 1,600 asylum-seekers are being given temporary shelter amid Europe’s worst migrant crisis since World War II (第二次世界大戰).

He is among more than one million migrants who have entered the EU, crossing to Greece (希臘) on inflatable boats.

But while the Brazilian government insists there is no turning back, storm clouds remain. President Dilma Rousseff (羅塞夫) could be ousted from office before the Games. The economy is shrinking for the second straight year and unemployment has shot up to 10.2 percent. Olympic organisers have cut budgets, but stressed stadiums are 98 percent ready.

In Hong Kong, TVB said it will broadcast live competitions and daily highlights across all its media platforms, including free and pay TV, the internet and mobile phones.

Seconds of the Olympics
https://goo.gl/aLJj9v