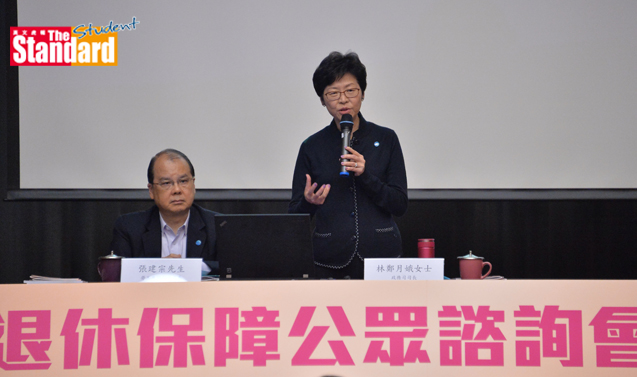 SOLID opposition has led the administration to drop plans to include public housing rent in poverty line calculations.

Chief Secretary (政務司司長) Carrie Lam Cheng Yuet-ngor (林鄭月娥), who chairs the Commission on Poverty (扶貧委員會), apparently accepted the idea would not work after a four-hour meeting.

The agenda for Monday’s meeting, which was leaked, included the question of adding as income the difference between market-value rent and rent paid by public housing tenants after a government subsidy.

Protesters from several political parties and concern groups demanded that the idea of using the public housing line be dropped, claiming the intention was to allow the administration to cut the budget for poverty alleviation.

Commission member and New People’s Party (新民黨) legislator Michael Tien Puk-sun (田北辰) told reporters that when he left midway through the meeting, he and several others had supported exploring the idea.

But another commission member, legislator Frederick Fung Kin-kee (馮檢基 ) of the Hong Kong Association for Democracy and People’s Livelihood (香港民主民生協進會), said later that he did not think officials would be raising the idea again in the near future.

“I expressed my concern that revising the line would give the false impression of successful poverty alleviation,” Fung said.

“I also pointed to the problem that society is being split by a number of issues and it was not the time to add another one.”

He also said most commission members agreed that the housing subsidy has been effective in helping poorer families and should not be counted as income.