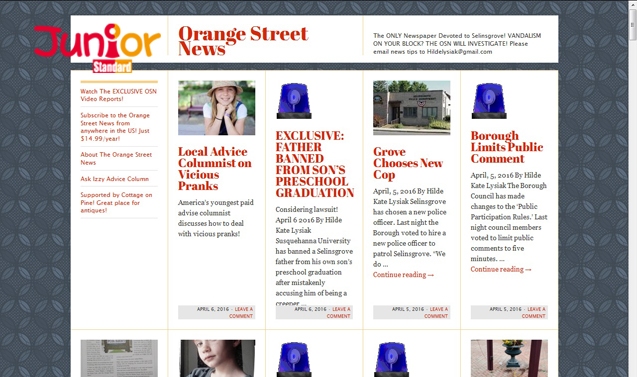 MOST parents do not even want their young children to read violent news.

So it is not surprising that people were upset when a nine-year-old girl went to the scene of a murder and wrote about it.

But Hilde Kate Lysiak, who lives in Selinsgrove, 150 miles northwest of Philadelphia (費城), is the reporter for her own online newspaper Orange Street News, which started publishing in 2014.

She used to only write ‘soft’ news and won positive comments. But recently she got a tip about a suspected murder in her hometown. She went to the scene to get the details and posted a story and video clip on her website.

Soon after, her Facebook page and YouTube channel were clogged with negative comments. Some urged her to ‘play with dolls’, other said she should have a tea party. Yet others questioned her parents’ judgment in letting her make such reports.

Anne Carter, a licensed practical nurse, said, “I think she’s very talented and her aspirations are great, but it’s probably a bigger case than a nineyear- old should handle.”

She gets help from her father, Matthew Lysiak, a former reporter for the New York Daily News. He said Hilde used to write “cuter storiesˮ but lately “got more confident and started stepping outside the box”.

(This article is published on Junior Standard on 12 April 2016)