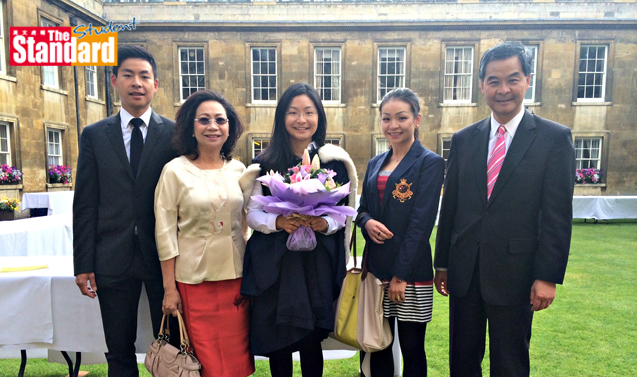 THE chief executive and his wife have denied abusing their position after a handbag their youngest child left behind in the departure hall of the airport was given back to her in a restricted area.

The bag was fetched from the departure hall and reunited with its owner Leung Chung-yan (梁頌昕) against strict security regulations.

The 23-year-old was about to board Cathay Pacific (國泰) flight CX 872, which was scheduled to take off for San Francisco (三藩市) at 12.30am on 28 March, when she realised she had left her handbag outside the restricted area.

The Cambridge University (劍橋大學) economics graduate was on her way back to Stanford University (史丹福大學), where she is reading international policy studies for her master’s.

Regina Leung, who saw her off, was not inside the restricted area, but was worried when she learned about it as the bag contained her daughter’s medicines.

CY Leung said in the statement that he did not request any one to “address me as Chief Executive Leung” and “did not exercise any privilege on that night”. He also denied contacting Airport Authority (機場管理局) officials or exerting pressure on them. But he acknowledged he had called his daughter through her mobile phone. It was then he learnt “from the airline staff assisting Chung-yan about the arrangements for claiming the hand luggage left behind in case Chung-yan was to depart Hong Kong first”.

Democratic Party chairwoman Emily Lau has demanded an independent investigation into the incident.