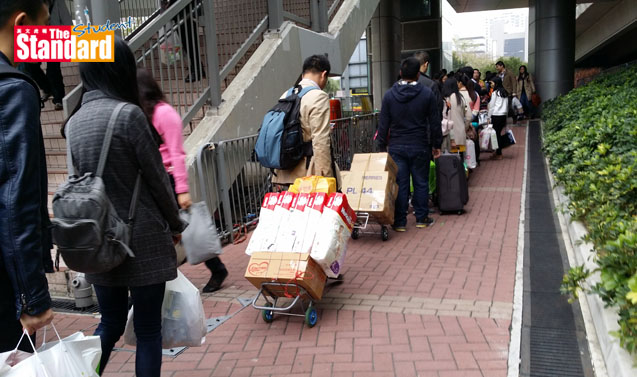 CHIEF Executive (行政長官 ) Leung Chun-ying (梁振英) said he will not seek to expand the Individual Visit Scheme beyond the current 49 cities and will, instead, seek to tighten arrivals.

He will discuss with the central government ways to reduce the inflow of mainland tourists when he attends the annual National People’s Congress (NPC, 全國人民代表大會) and Chinese People’s Political Consultative Conference (CPPCC, 中國人民政治協商會議) sessions in Beijing this month.

Speaking before attending the weekly Executive Council (行政會議) meeting last week, Leung said the Hong Kong government realises that the influx of mainland tourists has affected the livelihoods of citizens in some districts. It will therefore continue to discuss with Beijing (北京) ways to restrict the natural growth of mainland visitors to the city.

“There is no change in the Individual Visit Scheme (自由行) – no new city will be added to the 49 qualified cities list,” said Leung.

“I have been telling the central government that because Hong Kong has a limited capacity in treating tourists, I disagree with increasing the number of cities in the scheme.”

He refuted a local newspaper report that the central government plans to relax the Individual Visit Scheme.

“The report says only that the locations for mainland residents applying for individual traveller visas will be from cities to prefectures,” he said.

“It is only a matter of procedure. There is no change in the policy.”

NPC deputy Michael Tien Puk-sun (田北辰) said the chief executive does not have a full grasp of the situation and he suggested the government should set a quota for multiple-entry permits.

But he supported the suggestion that more mainland cities be allowed to join the Individual Visit Scheme.

Travel Industry Council (香港旅遊業議會) chairman Michael Wu Siu-ying (胡兆英) said the industry had no comment on setting a quota on multiple-entry permits, but said there is room to improve services for overnight tourists.

He said about 8,000 hotel rooms will be completed in the next few years.