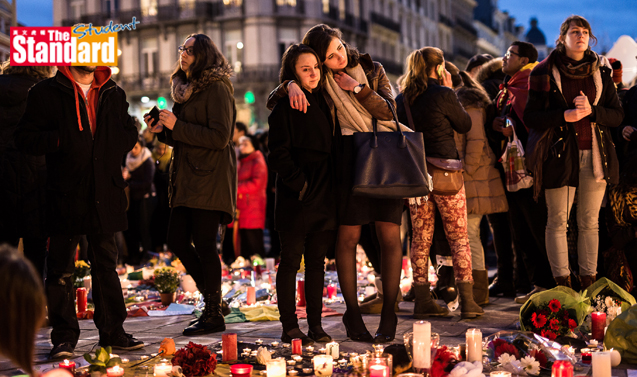 THOUSANDS of people went to Brussels’ (布魯塞爾) central square on 23 March, determined to defy extremists who would have them cower in fear. The Belgian capital got back to work, if not back to normal a day after suicide attacks killed more than 30 people at the city’s airport and a metro station.

Many of those laying flowers, lighting candles and scrawling messages of peace in chalk were children brought by parents who were seeking to explain that something terrible had happened. They wanted them to understand.

Defiance and fear mingled in the minds of residents coming to terms with the violence that they had long expected, but had hoped would not come.

“You can’t protect yourself against terrorism. Are you going to stay at home today? Tomorrow? The day after tomorrow?” asked Dirk Verstraeten, 53, who was on his way to work. “Life must go on.”

A platoon of soldiers stood guard outside the city’s central train station. There was only a trickle of tourists flowing through the gothic Grand Place (大廣場) and gardeners at the 18th-century Warande Park (布魯塞爾公園) were checking each trash can extra carefully.

A line swelled outside the central train station in Brussels as travellers queued up to get their bags checked. Soldiers stood guard every few metres as military trucks idled nearby.

The mood on the street was jittery. Several metro stations were still closed, roads were snarled with traffic. Sirens repeatedly wailed.

Joggers ran loops and dog walkers chatted in the park, across from the country’s parliament. But the gardeners on duty said the atmosphere was different.

“Behaviours have changed. Even our bosses seem stressed. They asked us to empty all the trash cans. We pay close attention to everything,” said Kevin Engels, 24, who was cleaning the park’s playground.